When I heard about a King Kong (semi)reboot in the works I was cautiously excited. I’ve said it before – and I’m sure I’ll say it again – I feel like Hollywood raids the past for movie concepts far too much in recent times and I believe movie goers are suffering for it. But the concept behind bringing Kong back in all its B-movie glory as a jumping off point for a new monster movie franchise? *pulls up a seat, grabs some popcorn, stairs at screen expectantly* Now, you’ve got my attention…

Kong: Skull Island establishes a new space for King Kong and builds an origin myth not only around the oversized ape (monkeys have tails, Kong ain’t a money dammit) but a static place from which “there are monsters among us” legends may arise. In my opinion, this is a smart move. It’ll be much easier to convince people not to look to prior films for references if you give them a clean starting point for your coming myth building.

I will caution you here, movie goer, to keep in mind you are going to see not only a monster movie but one with glorious B-movie origins. As far as I’m concerned, it means there is only one way to update a movie in this style – despite having a big movie budget – with tongue-in-check one liners, nonsensical solutions – of course there’s a ninja sword in this movie because of course there is – to monster attacks and bombastic moments full of smoke, explosions, blood, and smashing, lots and lots of smashing. The writing team of behind Kong: Skull Island kept these precepts firmly in mind while developing this screenplay. Director Jordan Vogt-Roberts used his budget to great effect coupling calculated moves and upping the cinematic imagery in ways that fully embraced monster movie tropes to the movie’s advantage. 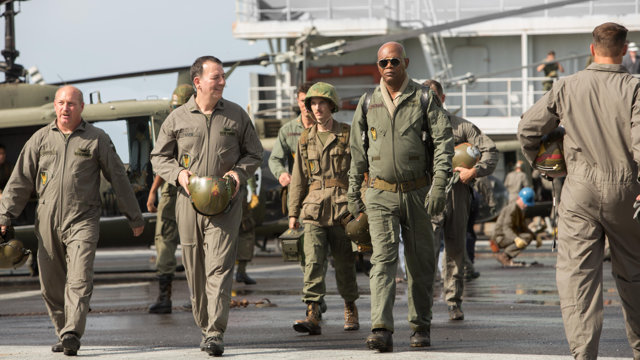 In another shrewd move, the writing team behind Kong: Skull Island set the story in 1973. It’s the end of the Vietnam War, the midst of the Cold War, and just before the country stopped openly believing – and funding – that the truth was out there and it wasn’t human. Enter secret agency man with a dual agenda Bill Randa (John Goodman) and the man with the big brain and the scientific theory, Houston Brooks (Corey Hawkins). In the chaos surrounding the US decision to pull out of the Vietnam conflict Randa scrambles to obtain government approval to tag along on a trip to explore a newly discovered island.

This expedition is the perfect vehicle to showcase both the island as an almost sentient character and bring together the movie’s team : a military squadron lead by the embittered Preston Packard (Samuel L. Jackson), research scientists lead by an extremely uptight Victor Nieves (John Ortiz), our suitably badass and taciturn ex-CAS Captain turned expert tracker, James Conrad (Tom Hiddleston) and in true disaster movie fashion, nosy photojournalist Mason Weaver (Brie Larson) who finagles her way onto the ship headed to the island following a hunch there’s a story to be had. She is, of course, correct. The government team is hiding more than one secret about this land adventure. Big secrets, the kind that bring on the havoc and always lead to mayhem. The setup is perfect for the introduction of both Kong and the otherworldly elements on Skull Island.

The script driving this story along isn’t going to win any awards and the characters aren’t here for deep development. The stand out performance comes courtesy of John C. Reilly as island inhabitant Hank Marlow. Marlow’s been stranded on Skull Island since World War II, 1944 to be exact. He’s this groups kooky sage imparting wisdom and island knowledge that if heeded could save lives – which of course means some know-it-all is bound to ignore him. John C. Reilly plays this part to crackbrained perfection; dominating his scenes with comical delivery and perfect timing. His story is interesting and provides opportunities for necessary info dumps and myth building in equal measure. But the rest of the cast is here for color and flavor more than anything else – they’re not completely without depth but they’re swimming in shallow water. They work well in service of the script – such that it is – and move things along at a, sometimes, slightly jerky clip. On the movies ground scenes not only bring mans’ place on this island into sharp focus, and to scale (Kong is HUGE, seriously this ape is big) it drives home the point man is nowhere near the top of the food chain. The island’s other oversized creatures are imposing, and some, more than a bit dangerously disturbing.

But this movie is all about Kong and in that regard, doesn’t disappoint.

He’s big, he’s badass and definitely pissed off at the humans flying around his island doing stupid human things. In all the ways you want to see him, Kong is there: pulling helicopters from the sky, smashing and bashing foes left and right. Emerging from the mist to inspect the humans invading his island home. Vogt-Roberts picks his moments to reimagine iconic moments associated with Kong, fitting for the current incarnation yet familiar-feeling enough to satisfy fans of the classics. For the record, Brie Larson may be the “damsel” who captures Kong’s attention, but she’s not just sitting around being all distressed…

The complete and utter defeat of the helicopter squadron at Kong’s hands – literally – fuels the more than half-crazed Packard’s vendetta to avenge his men and feed his desire to keep wreaking havoc and waging war. This part of the story is driven by Samuel L. Jackson fare. He’s obnoxiously focused on his vengeance and determined to flex his might toward that end, he gives in to his poorly checked rage. You can expect aptly placed (and cheesy) one-liners, eye-to-camera close-ups, that smirk and fire… there’s so much fire to be had. But as much as he may wish it, Packard is not the big bad in this movie. Man, is prey and hasn’t the first clue as to what exactly is waiting to swallow them whole. This message is unsubtle and made by piling up bodies of the vanquished. The writers also use these moments to drive home the ironic point of how often and easily man misidentifies its enemy yet continues to move forward brashly like a bull in a china shop.

The Apocalypse Now-style flashes and soundtrack keep the film oriented in time and place while providing a seamless accompaniment to explosions and traversing the islands waterways. The monster-on-monster pitch battles are smart and vicious. The scenes showcase both Kong and the Skull Crawlers as far more than simple mindless violent brutes hacking and slashing at one another without direction. The myth building is straightforward but uniquely displayed laying the groundwork for more theories and expansion. Kong: Skull Island makes no bones about what it is and it delivers. This film sets up for not only a resurgence of King Kong movies but overly kicks the door open for a new monster movie franchise as well. I won’t lie, there’s a scene at the end that had me unconsciously clapping like a kid with cake.

I like monster movies. The kid in me loves watching King Kong movies because Kong always seemed like more than just a monster; there was something thinking behind those big fists and angry eyes. He seemed harassed and misunderstood… plus he can take on just about anything standing in his way. Kong: Skull Island takes that feeling and brings it to the forefront – Kong so far from stupid it’ll make you gleeful and he’s not here for humans bringing drama to his island home.

Kong is King, and the Skull Crawlers are the wicked nasty big bad looking to dethrone him. The humans are just here to carry the tale home. Take your monster-loving friends, get some snacks, your 3D glasses and settle in for a good time.

This compelling, original adventure tells the story of a diverse team of scientists, soldiers and adventurers uniting to explore a mythical, uncharted island in the Pacific, as dangerous as it is beautiful. Cut off from everything they know, the team ventures into the domain of the mighty Kong, igniting the ultimate battle between man and nature. As their mission of discovery becomes one of survival, they must fight to escape a primal Eden in which humanity does not belong.

The kid in me loves watching King Kong movies because Kong always seemed like more than just a monster; there was something thinking behind those big fists and angry eyes. He seemed harassed and misunderstood… plus he can take on just about anything standing in his way. Kong: Skull Island takes that feeling and brings it to the forefront – Kong so far from stupid it’ll make you gleeful and he’s not here for humans bringing drama to his island home.