Jeremy Saulnier is a writer/director whose work has been interesting to watch evolve. His debut feature, Murder Party, had an entertaining premise but fell short in its delivery. His sophomore effort, Blue Ruin, was a notable step up with its very human tale of misunderstanding and revenge. However with his third feature, Green Room, Saulnier, as a creative force, seems to truly have arrived. 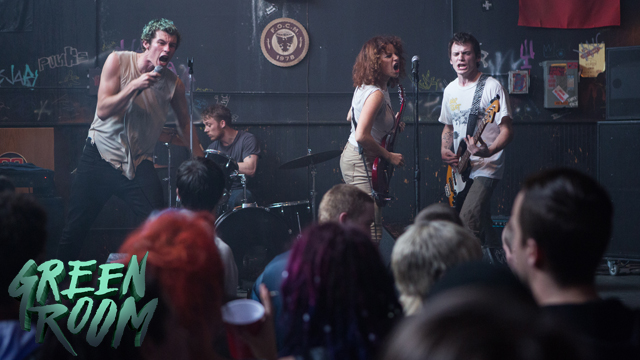 The story Green Room tells is that of The Ain’t Rights, a broke and obscure punk rock band that siphons gas from parked cars to get itself from one gig to the next. After playing a show with a particularly disappointing return, the promoter makes it up to them by booking them into a club that will pay them decently. The only catch being that this club turns out to be a white supremacist establishment, owned and operated by a Mr. Darcy Banker (played by none other than Star Trek TNG’s Patrick Stewart). When the band winds up witnessing a crime they should not have seen, they find themselves at odds with the ruthless Mr. Banker and in a fight for their very survival.

This film could be described as something of a punk rock Hitchcock movie, blended with the Coen brothers Blood Simple. It reminded me of Hitchcock in that it takes a seemingly mundane situation and introduces a simple plot device that turns everything on its head, leading to escalating suspense and tension. At the same time it reminded me of Blood Simple in that it was a stylish, skillfully directed thriller that employs graphic violence in a way that demonstrates how difficult it can really be to try and kill a person. 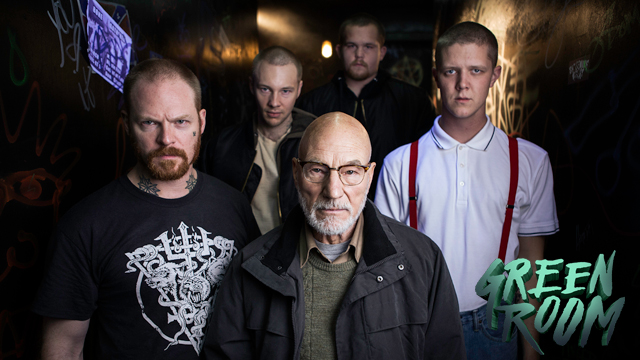 Overall, I have to say I was quite impressed with the movie. It was crafted in such a way that the tension built from one scene to the next, and it managed to hold its narrative together from beginning to end. This is the sort of movie that actually benefits from having a smaller budget. By not having lots of fancy stunts and effects, the film stays grounded and relies on acting and camerawork to deliver the thrills. It was like watching a classic suspense movie, only with modern violence and punk rock as subject matter. I was caught up in the film’s outrageous, yet sensitive and human, punk rock attitude. For me, this one is definitely recommended.

Down on their luck punk rockers The Ain’t Rights are finishing up a long and unsuccessful tour, and are about to call it quits when they get an unexpected booking at an isolated, run-down club deep in the backwoods of Oregon. What seems merely to be a third-rate gig escalates into something much more sinister when they witness an act of violence backstage that they weren’t meant to see. Now trapped backstage, they must face off against the club’s depraved owner, Darcy Banker (Stewart), a man who will do anything to protect the secrets of his nefarious enterprise. But while Darcy and his henchmen think the band will be easy to get rid of, The Ain’t Rights prove themselves much more cunning and capable than anyone expected, turning the tables on their unsuspecting captors and setting the stage for the ultimate life-or-death showdown.

By not having lots of fancy stunts and effects, the film stays grounded and relies on acting and camerawork to deliver the thrills. It was like watching a classic suspense movie, only with modern violence and punk rock as subject matter. I was caught up in the film’s outrageous, yet sensitive and human, punk rock attitude. For me, this one is definitely recommended.