The tagline speaks volumes, and the timing of the movie’s release is both prescient and ironic, in a time when it feels like a backlash from decades of being forced to be “politically correct” — even for those who never felt like being polite — has been wiped away. Now, so much of what people of color or other nationalities always felt was simmering below the surfaces can’t be ignored or laughed off anymore, because the simmer became a full blown explosion when we weren’t watching the kettle.

Social commentary on my part aside, the effective use of the disturbing nature of subtle hostilities and awkward assumptions are beautifully incorporated into typically normal situations in Get Out. Writer & director Jordan Peele then plays on our own anticipations of certain interactions as they begin to unfold, and shocks us when something doesn’t feel quite right or play out as expected.

The story follows Chris, a black photographer, and his girlfriend Rose, a white student from an upstate family entrenched in class and privilege, as she plans to bring him home to “meet the parents”. The undercurrents of discomfort start immediately, when he asks if she’s told them that he’s black, and her bewilderment at the fact that she should even have to do such a thing in this post-Obama era.

From there, they drive out to the countryside, where a family gathering turns into a high society party, and things go from polite to awkward to weird, then flying past unsettling straight into disturbing and calculated evil. Yes, there are a grab-bag of horror tropes, but they are played deftly, as hints and subtle clues if you’re paying close enough attention, and how they pay off (with twists) is delightful and disconcerting, even terrifying.

The increasing tensions from the awkward and seemingly friendly people at the weekend party easily resonate with anyone who’s been in a large social gathering where they weren’t quite sure how they fit in or with whom to try to start that one conversation that will settle everything down. It’s the perfect set up to ratchet up the viewer’s feelings of concern and paranoia right alongside Chris’, the kind where you end up convincing yourself that nothing’s wrong and that your own imagination is running away with you… forcing yourself to smile and continue to go along. 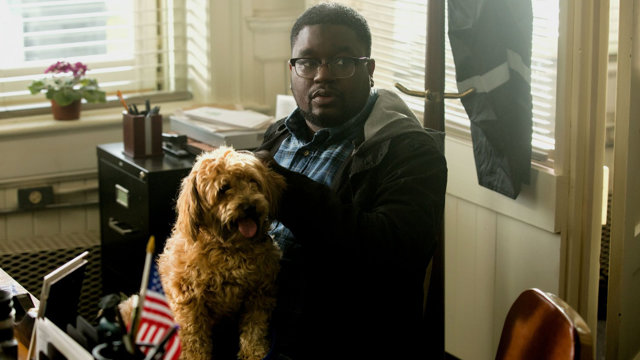 LilRel Howery, playing Chris’ best friend Rod, practically steals every scene he’s in. He’s seemingly providing a moment of comic relief to break the tension, but anyone who’s seen horror movies hears him as the voice of practicality: “Get out of there!” You also know that no one listens to him, and, well, telling more would be a spoiler.

Whatever you do, if you intend on seeing this movie, do not let anyone spoil any of it for you… not knowing when or how some of the best bits unfold is what makes this movie so powerful, and to me, what makes it worth seeing again just to make note of anything you might have missed or neglected to connect together the first time around (trust me, there were several that clicked when I thought about them while writing this review).

Psychological horror mixed with dark social commentary and unvarnished yet dismissed truths all come together in this film, and Jordan Peele has set a new bar in place for so-inspired filmmakers to aim for.

Now that Chris and his girlfriend, Rose, have reached the meet-the-parents milestone of dating, she invites him for a weekend getaway upstate with Missy and Dean.

At first, Chris reads the family’s overly accommodating behavior as nervous attempts to deal with their daughter’s interracial relationship, but as the weekend progresses, a series of increasingly disturbing discoveries lead him to a truth that he could have never imagined.

The effective use of the disturbing nature of subtle hostilities and awkward assumptions are beautifully incorporated into typically normal situations in Get Out. Writer & director Jordan Peele then plays on our own anticipations of certain interactions as they begin to unfold, and shocks us when something doesn’t feel quite right or play out as expected.