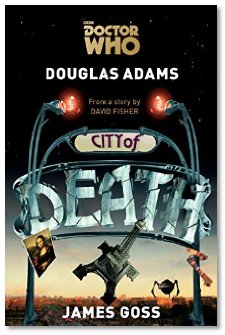 Based on the beloved Doctor Who episode of the same name by Douglas Adams, the hilarious and brilliant author of The Hitchhiker’s Guide to the Galaxy, comes City of Death…

“A nasty, savage race, the universe was glad to see the back of them…”

4 billion BCE: The Jagaroth, the most powerful, vicious, and visually unappealing race in the universe disappears from existence. Few are sad to see them go.

1505 CE: Leonardo da Vinci is rudely interrupted while gilding the lily by a most annoying military man by the name of Captain Tancredi.

1979 CE: Despite his best efforts not to end up in exactly the right place at exactly the wrong time, the Doctor, his companion Romana, and his cybernetic dog, K-9, arrive for a vacation in Paris only to discover that they have landed not only in one of the less romantic periods in Parisian history, but in a year in which the fabric of time has begun to crack.

It is once again up to the Doctor to uncover an audacious alien scheme filled with homemade time machines, the theft of the Mona Lisa, the resurrection of the Jagaroths, and the beginning (or possibly the end—it is all quite complicated, you see) of all life on Earth.

In the fifty year history of Doctor Who, few iterations of the Doctor himself are as recognizable and as well loved as that of Tom Baker, the Fourth Doctor. For seven consecutive seasons, Baker delighted audiences as the Doctor with his at turns both comical and darkly brooding portrayal of the infamous Time Lord, and became the most iconic of the regenerations of the Doctor with his wide, boggling eyes, mop of wild curls, love of Jelly Babies, and the ridiculously long, colorful scarf that has become his trademark.

In the halls of Doctor Who fandom, along with that legendary scarf, the name of Douglas Adams goes hand in hand with that of Tom Baker. Adams, known for his Hitchhiker’s Guide To The Galaxy books, started with Doctor Who, submitting early works to the show that later became volumes in his prolific series. Specifically, Adams is best known among Whovians for having an authorial hand in three well known Fourth Doctor stories: The Pirate Planet, Shada, and City of Death, which has only recently found its way into bookstores as a novelization penned by James Goss.

The story outlines a holiday that the Doctor and Romana, a youthful Time Lady not long out of the Academy, take in 1979. In the midst of their sightseeing, they detect a fracture in time that leads them into a complex plot that could destroy the world, involving all the classic plot devices: a grand art theft, forgeries of the Mona Lisa painted by da Vinci himself, and a one-eyed alien with tentacles for a head, single handedly responsible for the evolution of the human race.

…well, maybe not that conventional.

As outlined in his afterword, Goss utilizes rehearsal scripts from the original broadcast rather than the actual broadcast itself to put together the novel, offering far more intrigue and detail in even classic moments, such as John Cleese’s evaluation of the TARDIS as a work of art in a local Parisian gallery. Goss also does an exceptional job of the kind of prose that is Adams’ signature, interpreting the landscape of the story with various non-sequitors, absurd inner monologues, and encyclopedic bits of comical exposition that come out of nowhere to remind you of this story’s roots, and the brilliance of the man who helped bring it into being.

Being a bit of a baby Whovian, City of Death is a story I have not yet seen, having been exposed to precious little of the Baker era. For this, I am grateful, as Goss does a wonderful job of breathing life into this story that can capture the interest of even an uneducated fan, providing them with a wonderfully entertaining story that is satisfying in its own right, and at the same time leaves you with the itch to find the source material and see how it holds up.

Hardcore fans and casual followers will all have their own opinions, but as excited as I am to take in the original serial… as we all know, the book is often better than the version on screen.

"Doctor Who: City of Death" by James Goss

Being a bit of a baby Whovian, City of Death is a story I have not yet seen, having been exposed to precious little of the Baker era. For this, I am grateful, as Goss does a wonderful job of breathing life into this story that can capture the interest of even an uneducated fan, providing them with a wonderfully entertaining story that is satisfying in its own right, and at the same time leaves you with the itch to find the source material and see how it holds up.

Covering subjects from pro wrestling to independent music and right back to home sweet science fiction & fantasy, Liz has been leaving her mark on blogs across the internet for the better part of a decade. Currently, she writes for sites such as Krypton Radio, Second Geekhood (where she also serves as editor), and previously served as co-host for the Doctor Who themed cosplay radios how THE CORSAIR'S CLOSET. She can be found on Twitter and on Tumblr.