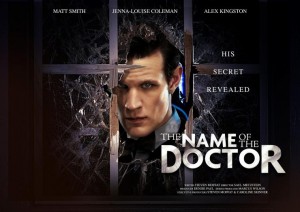 The BBC has revealed the title of the upcoming season finale for Doctor Who.

The episode, written by Steven Moffat, will lead into the 50th anniversary celebration later this year.

It may also answer one of the biggest questions in the show’s long history.

The title is….”The Name of the Doctor.”

Exactly what this means and what will be revealed remains to be seen.

So, are you excited? Do you think the true name of the Doctor will finally be revealed?