Doctor Who: Deep Time is part of series called “The Glamour Chronicles” featuring the 12th Doctor and his Companion, Clara Osgood. 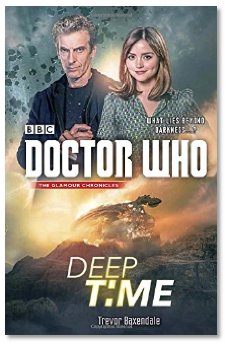 A deep-space expedition in search of the final fate of a civilization that rose at the beginning of the universe. A starship crewed with individuals whose personal agendas may stand in opposition to each others’. And the Twelfth Doctor and Clara Oswald, in pursuit of an ancient entity known as The Glamour, an object or entity that works its evil by convincing other life forms that it is the object of their greatest desire.

Good
This is a crisply plotted space opera that draws not only on the conventions of the Whoniverse but also on the traditions of science fiction in general. The characters are rich and believable, ranging from a driven archaeologist to rich playboy looking for adventure to the ship’s captain, the cyborg navigator, and the chief engineer and assistant. The expedition immediately runs into disaster, and the crew must learn how to survive the perils of a planet torn apart by temporal storms as well as the machinations of individuals who have their own motivations. The dangers of the planet are quite visceral, and when characters die, the emotions and reactions feel real. Best of all, the voices of Peter Capaldi and Jenna Coleman sing out in the dialog and descriptions.

Not-so-good
Deep Time is one of three books in the so-called “The Glamour Chronicles”. None of the books indicate in which order they should be read. This might be a fitting approach to stories about a time traveler to whom linear time is a quaint notion, but in Deep Time the references to the Glamour indicate that the Doctor and Clara have been in pursuit of this entity for some time. However, the story gives the reader enough information to make sense of what the Glamour is without bogging down the plot or leaving the reader puzzled about what’s going on.

Overall
Deep Time would be an excellent story to adapt to an actual series episode. Not only would I recommend this book to fans of the Doctor, but also to readers of science fiction in general.

Deep Time would be an excellent story to adapt to an actual series episode. Not only would I recommend this book to fans of the Doctor, but also to readers of science fiction in general.