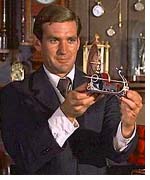 Rod Taylor, the man best known for two of the most iconic movies in sci-fi and horror history has died at the age of 84, just two days shy of his 85th birthday.

Taylor starred as the leading man in the 1960 film version of the H.G. Wells classic The Time Machine, considered by most critics as the best screen adaptation of Wells’ novel. His other most notable genre big screen presence was playing the protagonist in Alfred Hitchcock’s time honored classic The Birds with actress Tippi Hedren in 1963.

Taylor went on to star in many other films and TV shows throughout his 58 year career as an actor, producer, writer and composer.