A long time ago, in a media entertainment world not so very far away, comic book adaptations for television and film were terrible. They often were plagued with poor casting choices, bad writing, “creative differences”, you name it… the end product sucked, and comics geeks and other fans of speculative fiction who might have enjoyed the stories all suffered because you never knew how long it would be before someone decided to “take a risk” and try again to make a hit with another comics property.

I’m kinda glad Marvel made $50 billion over the past few years to show everyone that it pays to make sure that an adaptation of a good, iconic comic title is done well. DC seems to be learning by example, at last. I was always a Marvel girl back in the day, but a handful of DC titles found their way into my hands now and again. I never took to Batman or Superman (no, seriously, I didn’t), but I enjoyed Teen Titans, Green Arrow, the occasional Justice League Annual (I think that’s what they were), and later on, Hellblazer and Neil Gaiman’s Sandman, plus a wide range of limited series that have yet to be collected, as far as I can tell.

Now, John Constantine is the latest DC “hero” to come to life on screen, and it’s starting to seem to me that while Marvel owns the movie box office, DC is taking names in the television realm, first with Arrow, and now both The Flash and Constantine. We’ll see what happens with Agent Carter in January, but DC is ahead in the TV adaptations game.

Based on the popular comic book series “Hellblazer” from DC Comics, seasoned demon hunter and master of the occult John Constantine (Matt Ryan, “Criminal Minds”) is armed with a ferocious knowledge of the dark arts and a wickedly naughty wit. He fights the good fight — or at least he did. With his soul already damned to hell, he had decided to abandon his campaign against evil until a series of events thrusts him back into the fray, and he’ll do whatever it takes to protect the innocent. With the balance of good and evil on the line, Constantine will use his skills to travel the country, find the supernatural terrors that threaten our world and send them back where they belong. After that, who knows… maybe there’s hope for him and his soul after all.

Oh, and the music is by Bear McCreary. Bonus points, in my book.

I wasn’t sure what to expect with this show, but this incarnation of John Constantine has me hooked and intrigued. Matt Ryan has fully embodied the fatalistic outlook and dark humor of the character, and of the 6 episodes that have aired (so far), 4 of them are ones I’ve watched more than once (thank you, Hulu).

The special effects are feature film quality, and for me, the stories are getting better, while hints of “the coming darkness” are being dropped here and there, but not overwhelming the main storyline of each episode.

No spoilers here, but the change in female leads from the pilot to the series happened because of scheduling conflicts with the first actress, but I believe that having Zed (Angelica Celaya) rather than Liv (Lucy Griffiths) playing foil and student to Constantine (Matt Ryan) was a good change. The chemistry between those two is better, and Zed can match John’s snarky commentary all day long.

It’s not too late to catch up; all the current episodes are available on iTunes, and the most recent 5 episodes can be viewed free on Hulu. Since Season 1 is just 13 episodes long, catching up now and rewatching them a few times won’t be too hard to do.

It’s a mystery to many why NBC didn’t pick up the back 9 episodes, to give Constantine a full 22-episode season, but the fans and the viewers who’ve been hooked so far have been making their feelings known, along with star Matt Ryan and writer Daniel Cerone, and the Constantine writers on Twitter.

I’m a fan of 13-15 episode seasons, and the only downside is the longer wait until a new season would start. The shorter runs seem to encourage tighter writing and sometimes more adventurous storytelling, both good things in my book. If NBC renews for another 13 or another 22, I’ll call it a win, either way.

Constantine airs Fridays at 10pm E/P, on NBC, right after Grimm. Go, watch, now. Summer wants to see more of this show next season, so we have to make this happen! I haven’t had this much fun watching hellspawn being dispatched since Brimstone. 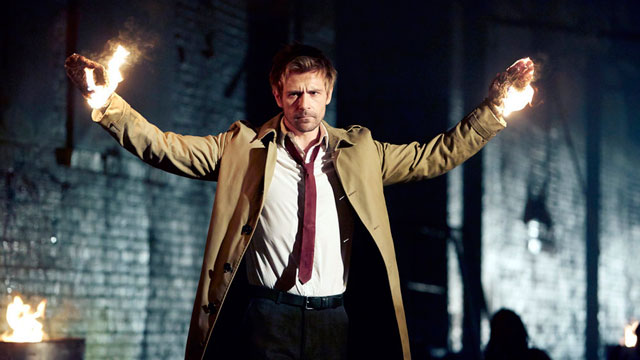 John Constantine is the latest DC “hero” to come to life on screen, and it’s starting to seem to me that while Marvel owns the movie box office, DC is taking names in the television realm.

I wasn’t sure what to expect with this show, but this incarnation of John Constantine has me hooked and intrigued. Matt Ryan has fully embodied the fatalistic outlook and dark humor of the character, and thanks to Hulu, I’ve gladly watched the all of the available episodes several times over.