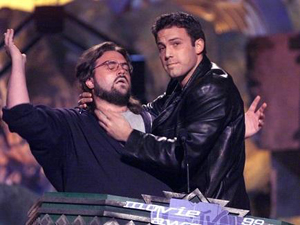 Kevin Smith has seen the new Batman suit for the upcoming Superman/Batman film starring his bud Ben Affleck as the caped crusader and Henry Cavill as The Man of Steel.

On his Fat Man podcast Kevin said he was attending a special event — well, I’ll let him explain it:

“I talked about it on Hollywood Babble-On, but I have seen the suit. I did this Man of Steel Yahoo, fan event when the DVD came out. I was hosting – Zack Snyder was there, Amy Adams, we had Henry Cavill from satellite over in the UK, and you know it was all about Man of Steel. And at one point Zack talked a little bit about the future and Batman Vs Superman, but when the show was all done, Zack was all like ‘Kev come here, come here’, and he takes me over to the corner and whips out his phone, and he shows me a picture of Batman. Live action version of Batman. A very familiar Batman, I might add. It didn’t look like any of the cinematic Batmans (sic) that have ever gone before.”

“He shows me that picture and behind Batman…Superman in the suit looming in the distance. Both on a roof-top kind of thing. It was on a set, a little set they put together for this photo shoot. So I was like ‘Oh my god! Is that the suit?! The suit looks amazing! Did you get people to model it?’ And he goes, ‘That’s your boy.’ And I look closely and it’s Ben Affleck wearing the suit.”

“The suit, it is not mine to spill, in terms of what it looks like, you’ll see it. They’ll tell you when they want you to know, but any Batman fan is going to be F—ing pleased. I’m going to tell you that right now. They gave you the suit you all wanted to see.”