Epic Pictures Group announced today that it will collaborate with top directors to finance and produce a brand new horror anthology, named Tales of Halloween. 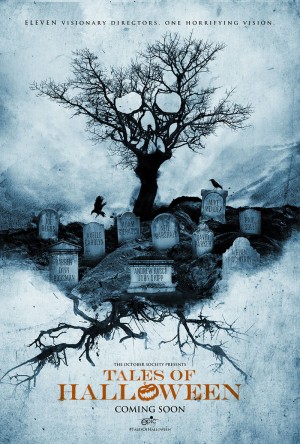 Tales of Halloween will be produced by Patrick Ewald and Shaked Berenson of Epic Pictures Group along with Mike Mendez and Axelle Carolyn. Axelle Carolyn created the concept and brought the filmmakers together for this unique production.

“It’s so great to be working with such a unique and talented group of directors,” Neil Marshall stated. “Many of The October Society have been friends for years so when Axelle had the idea of combining our talents for an anthology based on our mutual love of Halloween and all things scary, it was a no-brainer. I can’t wait for this to become a must-watch movie for horror fans on many a Halloween night to come!”

“This anthology movie is unique in that that the directors aren’t a randomly assembled bunch who’ve never met; they’re close friends who are working closely together as a team to deliver something truly special,” said Axelle Carolyn.

“This collaboration is unprecedented,” said Epic Pictures Group CEO Patrick Ewald. “We’re excited to work with all of these talented directors to create a myriad of stories that will fascinate, thrill and scare fans, elements they’ve come to expect from these amazing filmmakers.”

“We collaborated successfully with a few of the directors in the past and others have been friends of the company for a while,” said Shaked Berenson Epic Pictures Group Co-Founder. “It will be fun to all work together on one project.”

Currently in pre-production, Tales of Halloween will be shot in November, with the official international teaser poster to be brought to the 2014 American Film Market (AFM) by Epic Pictures Group.

Ten stories will be woven together by their shared theme of Halloween night in an American suburb, where ghouls, imps, aliens and axe murderers appear for one night only to terrorize unsuspecting residents.

The directors have created a manifesto with rules to create their films based on the values of Halloween night. The antithesis of the Dogme 95 manifesto, the directors will not be frugal with special effects, props and musical score, and have already attracted notable talent in the horror genre, such as composers Frank Ilfman (Big Bad Wolves) and Joseph Bishara (The Conjuring).

“The exciting thing is that these filmmakers are not only talented, but genuine fans of the genre and the holiday,” said Mike Mendez. “This project is a celebration of Horror & Halloween and we can’t wait to invite you to our twisted cinematic party next year!”