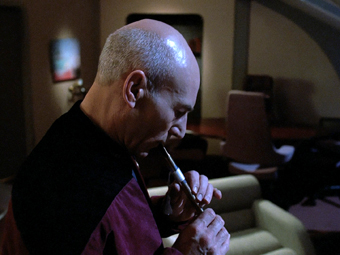 The Museum of Science Fiction in partnership with the DC Public Library will host Star Trek screenwriter, Morgan Gendel.  Mr. Gendel will screen his Hugo Award-winning episode of Star Trek: The Next Generation: The Inner Light.

The Inner Light which places the USS Enterprise’s Captain Jean-Luc Picard in an alternate life for what seems to him like 50 years, has been ranked as one of the Top 10 best episode from among all 700 hours of various Trek series. The tale of Picard’s road not taken, into a life of hearth and home, has resonated with fans for nearly a quarter of a century.

Following the screening, Mr. Gendel will discuss his inspiration for the episode and will tell all about his behind-the-scenes’ experiences in the Star Trek world. Time for questions and answers will follow the talk.

Morgan Gendel is a former journalist and network executive who over the last 25 years has written or produced more than 200 episodes of television, including Star Trek: The Next Generation, Law & Order, MTV’s Spider-Man, V.I.P. and The Dresden Files. He is partnered with Stan Lee on the graphic novel “Hellana” and is currently adapting the Ursula K. LeGuin novel, “The Telling” as a feature film. He teaches drama TV writing at Columbia College Chicago, International Film School of Cologne, the Filmakademie in Stuttgart, and speaks at dozens of science fiction events around the world.