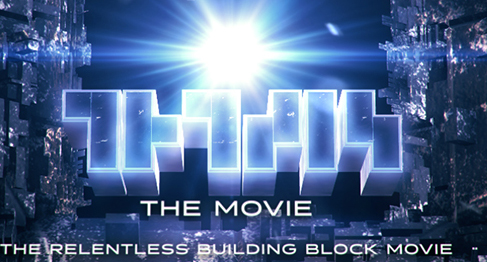 After the box office success of the Transformers and LEGO films does it come as any surprise that Threshold Entertainment and the folks over at the Tetris Company have put their dollar-sign heads together for a new movie based on the 1980’s vid-game “TETRIS?”

I think not. In fact, if you were a follower of our old Slice of SciFi shows (and … hint, hint … we will be returning soon) our very own Slice host Michael R. Mennenga was one of the first to signal that a LEGO, and yes, TETRIS movie would be coming to a theater near you one day. So far Mike is two out of three. We’re still awaiting his predicted Monopoly movie.

But this Tetris news is serious business according to Threshold CEO Larry Kasanoff, the kingpin behind the successful “Mortal Kombat” game. He recently told WSJ Speakeasy that, “It’s a very big, epic sci-fi movie.” Whaaaaaaa!

Kasanoff went on to say that , “This isn’t a movie with a bunch of lines running around the page. We’re not giving feet to the geometric shapes … what you will see in ‘Tetris’ is the teeny tip of an iceberg that has intergalactic significance.”

Okay Larry. Now you have our attention. Perhaps we shouldn’t keep kidding Mike about a possible Monopoly movie.