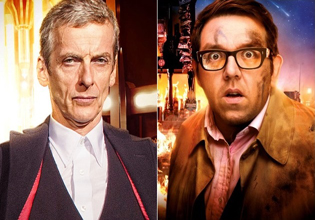 Nick Frost, mostly known from his bromance roles with actor Simon Pegg (Star Trek), has been offered and accepted a lead role for the 2014 Doctor Who Christmas Special. Production for the episode has already begun.

Frost recently starred in The World’s End, the story of a group of old friends, after high school, went their separate ways and have rejoined years later to hit every pub in their childhood town ending with the infamous bar The World’s End. What they soon find out is their old haunts have been overtaken by a group of aliens with nefarious plans to overtake humanity.

Doctor Who showrunner and head writer Steven Moffat made the official announcement through BBC One saying, “Frost at Christmas — it just makes sense! I worked with Nick on the ‘Tintin’ movie many years ago, and it’s a real pleasure to lure him back to television for a ride on the TARDIS.”

In an official statement Frost commented, “I’m so thrilled to have been asked to guest in the ‘Doctor Who’ Christmas special, I’m such a fan of the show. The read-through was very difficult for me; I wanted to keep stuffing my fingers into my ears and scream ‘No spoilers!’ Every day on set I’ve had to silence my internal fan boy squeals!”

Other actors starring in this episode will be the son of second Doctor Who Patrick Troughton. His name is Michael Troughton. Michael is famous in his own right having starred in several successful UK television series over the last 30-years. Also guest starring for the Christmas Special are Natalie Gumede (Coronation Street), Nathan McMullen (Misfits) and Faye Marsay (The White Queen). Of course the big question is — are the rumors true that this will be Who companion Clara Oswald’s (Jenna Coleman) last time travel adventure with the Doctor?

Frost currently has three other films at various levels of production due out in late 2014 and Summer 2015.