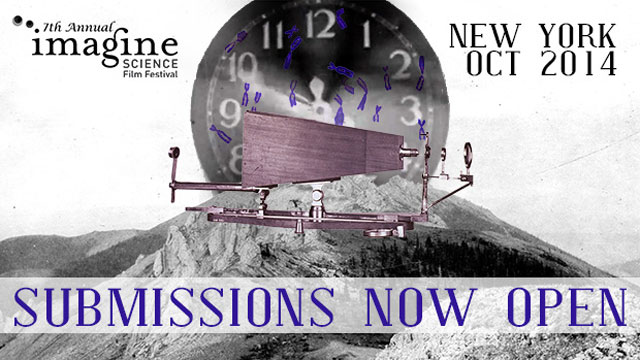 The theme of the 7th Imagine Science Film Fesitval is “TIME”.

This year’s festival will explore TIME in all its variants: timelapse film, the age of the universe, time travel, geologic time, nanosecond-scale subatomic interactions, the genetics of aging, and much much more.

The Imagine Science Film Festival exists to promote new dialogues between art and science, between specialists and the public, and even between fact and fiction portrayals of information. And so they take a broad view on narrative science film, welcoming fictional stories featuring scientists and credible scientific principles, compelling and visually-stunning documentaries, animation, cutting-edge data and visualizations, music videos, and experimental film.

In line with the festival’s mission, full day programs at the festival will be devoted to avant-garde science, documentaries, footage from actual lab experiments, panel discussion of time and its measurement, and kid-friendly science-based films.

Though TIME this subject is the special focus of this year’s festival, films on the full spectrum of other scientific subjects are also being accepted, as always.

The 7th Annual Imagine Science Film Festival will run in October, circulating through a variety of venues, including theaters, museums, and universities throughout New York City, Brooklyn, and Queens.

Late submissions for the 7th Annual Imagine Science Film Festival are still being accepted, but only until August 1. All submission guidelines here: http://www.imaginesciencefilms.org/2014-submissions/