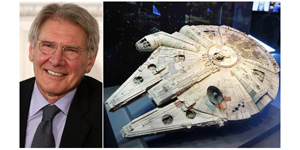 Harrison Ford’s recent injury on the set of the next Star Wars film will now cause a delay in Ford’s film shooting schedule of at least two months.

When the injury was first reported it was thought the damage done to his ankle was minor after the door of the Millennium Falcon spacecraft fell on it. Ford was rushed to the hospital and first reports at that time were promising that he was alright and there would be no interference with his part of the film shoot.

However, an anonymous source from the UK set of Star Wars VII has told the Mirror Ford’s injury was a lot more incapacitating than first thought.

“The initial day or two after the accident it was hard to move things around but now we have had more time we can juggle things, bring some scenes forward and push others back,” stated the unnamed source. “There are lots of other actors in the movie so it is not a disaster. We are still confident the film can stay on schedule. At the moment it looks like Harrison is going to be off set for 6-8 weeks but the main priority is making sure he is OK.”

There has been no official news from the film’s director J.J. Abrams or anyone from Disney Studios or Lucasfilm to verify the report but one official spokesperson from the Star Wars production crew did indicate they may have “some good news soon.”

Stay with Slice of SciFi for any relevant updates.