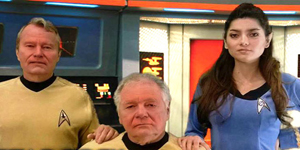 Actor/Producer John Savage has a Star Trek dream that is slowly coming to fruition. John is best known for his award winning and nominated roles in such landmark films as The Deer Hunter, The Amateur, The Godfather II and The Thin Red Line. He also starred as Captain Rudy Ransom in thd 2-part episode of Star Trek: Voyager titled “Equinox.” It was during the shooting of Equinox that Savage caught the Star Trek bug.

His idea for this new Star Trek independent film project called Star Trek Equinox: The Night of Time centers on his character Captain Ransom and takes place fifteen years after his Federation starship the USS Equinox was destroyed in the Delta Quadrant. Like Voyager, the Equinox was pulled into the Delta Quadrant by the mysterious creature known only as the Caretaker. During his first week in the Delta Quadrant, over 30,000 light years from the Alpha Quadrant, Captain Ransom lost half his crew in battle with the Krowtonan Guard. It was at this point that he abandoned his years of Starfleet training and became a brigand in the eyes of the Krowtonan Guard and continued violating their space in order to find a quicker means back home. This led to near devastation of his ship and the remainder of his crew which was the state in which Captain Janeway and the crew of Voyager found them after receiving Equinox’s distress signal. As Ransom was about to surrender to Janeway his first officer mutinied and fired upon Voyager. Just before Ransom’s ship was vaporized into nothing with him at its helm the Krowtonans beamed Ransom out and whisked him away where he was to stand trial for crimes against the Krowtonan people by violating their space and bringing death and destruction to an entire species known as the Ankari in his wake.

The cast and crew are now in place. Pre-production is underway with a shooting schedule set to begin this year. Along with John Savage reprising his role of Ransom a fan favorite from the TOS era, Gary Lockwood, has signed on to the project to return to the Trek universe as Gary Mitchell. Other cast members include John Kapelos (Justified, Forever Knight), Cindy Pickett (Ferris Bueller’s Day Off), Blanca Blanco (Awakened), and in a homage to Star Trek creator Gene Roddenberry actress Samantha Lockwood (daughter of Gary Lockwood) will portray a new character named Nurse Christine Roddenberry.