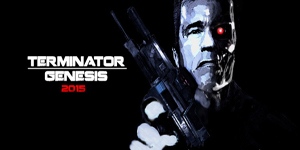 Matt Smith (Doctor Who) has sent an uber-geek electrical charge through the nerd network with the news that he will be joining Game of Thrones actress Emilia Clarke on the set for the new Terminator franchise reboot titled Terminator: Genesis.

In a press release Paramount and Skydance Productions announced that Smith has been signed on for “a major role” and joins the cast that includes Clarke in the female lead as Sarah Connor, Jai Courtney (Divergent) will be Kyle Reese (John Connor’s daddy) and Jason Clarke (Zero Dark Thirty) is John Connor, the franchise’s future hero. Arnold Schwarzenegger returns as the Terminator.

John Connor is actually in his late forties for this story while his mom Sarah is only in her mid-twenties – so they may have hired Matt Smith for his timey-whimey time traveling skills for this one too. Well…..maybe not (one can dream!). Smith will reportedly star in all three of the scheduled rebooted films.

Terminator: Genesis is scheduled for theatrical release on July 1, 2015.

HOLLYWOOD, CA (May 2, 2014) – Paramount Pictures and Skydance Productions announced today that “Doctor Who” star Matt Smith will join the cast of the upcoming “TERMINATOR” reboot.

Smith is best known for playing The Doctor on the popular “Doctor Who” television series during the 2011-2103 seasons. His other television credits include “Christopher and His Kind,” “Moses Jones,” and “The Street.” He can be seen next on the big screen in “LOST RIVER,” directed by Ryan Gosling, alongside Christina Hendricks, Saoirse Ronan and Eva Mendes.

He is represented by United Talent Agency and Michael Duff at Troika.

The “TERMINATOR” franchise launched in 1984 with Schwarzenegger as the title character and spanned three subsequent films, which have earned more than $1 billion at the worldwide box office.

Paramount will distribute the film worldwide on July 1, 2015.