According to Marc Graser, senior editor over at Variety Microsoft/Xbox is getting ready to unleash a bevy of games to live-action television series and feature movies. 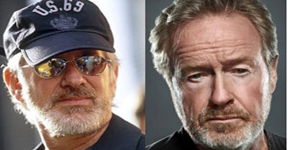 The first has already been in the rumor mill for some time now. That one is the Steven Spielberg produced TV series Halo. Ridley Scott will also be involved with a big screen film based on Halo as well.

Simon Chinn (Man on Wire) is set to feature six film documentaries titled Signal to Noise that will highlight how new technologies have changed the way in which humans interact with one another and machines. The first installment will feature the recent revelation of Atari’s burial of millions of unsold E.T. the Extra-Terrestrial games in a New Mexico landfill.

A UK produced sci-fi series called Humans, based on the Swedish gaming series of the same name, will tell the story of interaction between human beings and their robotic servants. Look for it sometime in 2015 on the Xbox platform and UK’s Channel 4.

Other game to series/film titles to keep an eye out for are shows based on such gaming hits as Gears of War, Fable, State of Decay and Age of Empires. Others slated for release at a future date are Fearless, Extraordinary Believers, which Seth Green will co-produce, Deadlands and the highly anticipated Winterworld – just to name a few.