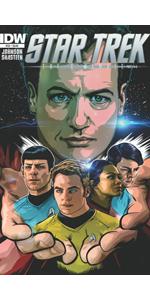 Could Q make an appearance for the next big screen Star Trek alternate universe film? Perhaps so if graphic novelist Mike Johnson has anything to say about it.

Johnson has finished his latest work of Trek with The Q Gambit, the newest in Alternative Trek graphic novels. Johnson also brought other Trek features to comics such as Countdown to Darkness, After Darkness and Khan. Famed graphic illustrator Tony Shasteen (The Talisman, Batman: Arkham Unhinged) has provided the artwork for the novel.

For The Q Gambit the omnipotent but harassing Q takes the Enterprise crew on a journey that will include other well known members of the Trek franchise, although in different eras. Hint – a space station fans have come to know and love.

Johnson stated he likes seeing how the new Alternate Trek has taken familiar characters from the franchise and sort of turned them on their ear. “But one iconic adversary remains unchanged,” said Johnson. “Q! His fascination with humanity and his penchant for mischief remain the same across the multiverse, and now he’s come to take the Enterprise crew on an adventure that will bring new meaning to the phrase ‘no-win scenario.’”