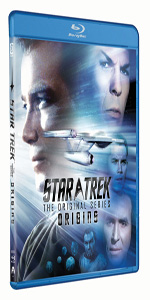 The episodes include “The Cage,” the original Star Trek pilot (featuring Pike and Spock); “Where No Man Has Gone Before,” the second pilot (which featured Kirk and aired as the third episode of season one); “Space Seed,” which gave fans their first glimpse of Khan; “Errand of Mercy,” in which the Enterprise crew, and fans, met the Klingons; and “The Trouble with Tribbles,” which first unleashed the cute but problematic Tribbles.