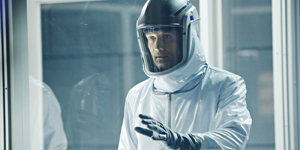 On the eve of the season finale of the new science fiction hit series Helix the SyFy Channel has announced it has renewed the show for a second 13-episode season. SyFy has it slated to return to its Friday night lineup in the winter of 2015.

The series centers around a group of scientists and CDC inspectors stranded at a research facility in the Arctic Circle, trapped there during a deadly disease outbreak and hunted down by corporate thugs bent on getting their hands on the plague and its cure. The biggest secret is the effects of the disease on a select few who can survive its onslaught.

Helix has proven its sustainability with the all-important 18-49 male demographic in one of the toughest time-slots in TV programming. First its on Friday night, secondly its competition is the highly acclaimed CBS Tom Selleck vehicle Blue Bloods and the NBC power duo of Grimm and Hannibal.