If you missed your chance to see William Shatner live on stage during his critically acclaimed One Man Show that toured the country in 2013 all hope is not lost. Thanks to Priceline.com and Fathom Events The Shat’s phenomenal stage performance can be viewed one more time on screen in a theater near you.

This special cinematic event will take place on April 24, 2014 in movie theaters throughout the country, many of those locations will be in IMAX format.

I was fortunate enough to catch Bill live and in person on stage when he appeared at the famous Lied Center and was amazed at his performance and stamina during the 90-plus minute production that featured nothing but the personality and witticism everyone has come to love from the man that has been entertaining crowds of TV, movie and stage goers for over 60-years.

If you have never seen The Shat live and in person then you will be in for a real once in a lifetime treat and this event will be about as close as this cinematic one-time performance can get to the real deal.

For more information, theater locations and tickets go to the Shatner’s World website. 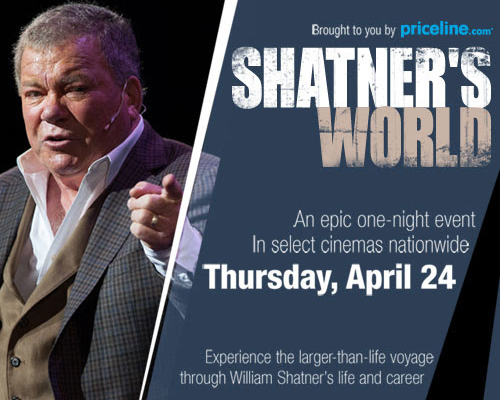