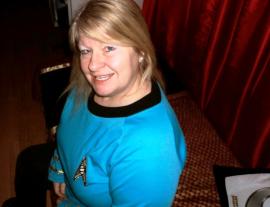 We have all heard of the “Man Cave,” that one special place men like to scurry off to in their homes that is their special place for alone time in the big overstuffed recliner, fridge, possibly a bar, big screen TV and poker table. Well, meet Line Rainville from Notre-Dan-des_Prairies, Quebec, Canada. She has built herself a “Woman Cave” and it’s all about original series Star Trek.

At a cost of $30,000 (USD) Line has converted her basement into a spot-on replica of the Enterprise NCC-1701 bridge, recreation lounge, observation deck, the main transporter room and even a replicator.

Rainville is an avid original series Star Trek fan, a being only one hour from the birthplace of William Shatner (Captain James T. Kirk), she was moved to take her hard earned cash and convert a drab space into a shining example of dedicated trekdom.

Even the furniture is all handmade replicas of those found on the Enterprise, with a touch of 21st Century comfort included in the form of soft cushioned chairs for relaxation. She placed her big screen HD TV in the spot normally reserved for the bridge’s viewing screen. In all, her basement was converted to a suite of rooms each modeled after rooms on the original Constitution Class starship, including special touches like a a few tribbles here and there, a 3D-Chess Set, tricorders, the sound of Vulcan bells in Spock’s redone bedroom, a few colored floppy computer disks lying around on table tops like those used on the original series and exposed utility piping like those seen on some of the corridors of the Enterprise, even the one place we never saw but knew was there – a Starfleet issued bathroom. It even has a dining area off of the kitchen/lounge.

At Rainville’s Trek-Warming party guests were treated with the familiar multi-colored food blocks and a nice bowl of Vulcan Plomeek soup. The only thing missing was a nice cauldron of Klingon blood wine and a pot of raw Gagh.

All I know after seeing Rainville’s remodeling work is – I got to have one of these whenever I can free up an unneeded thirty grand.

To see more cool images of her basement-Trek-makeover check these out courtesy of c/net.