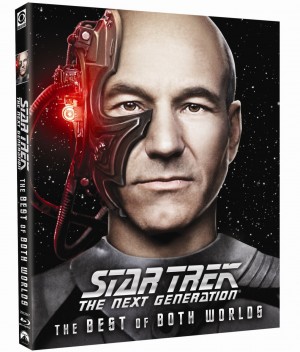 Forget “Who Shot J.R.?”  For my money, the greatest season-ending cliffhanger in television history occurred in the summer of 1990 as the third season of Star Trek: The Next Generation came to a close with Riker uttering three words that would keep me (and tons of other fans) on the edge of their seats for three very long months.

If you were watching Next Generation, odds are you recall that moment with your jaw hitting the floor and realizing just how long the next three months were going to be.   It was helped by the fact that the 42 minutes leading up to that pivotal moment were the best thing Next Generation had done or ever would do.

“The Best of Both Worlds, Part 1” is in my top five all-time great episodes not only of Star Trek, but also all of television.   After watching the extras included on the upcoming Blu-Ray release for the story, I’m not alone in this estimation.

I will admit when I first heard the news that Paramount and CBS were releasing “Best of Both Worlds” as a single-release Blu-Ray, I was skeptical.   Given that both parts of the story will be part of the season sets made it seem like this was a bit of a double-dip.  And while you can get both parts of the story on the season sets, there’s enough included in the extras to make it worth your while in picking this one up.  Included is a thirty-minute behind the scenes documentary that includes much of the cast and crew from this two part story, reminiscing about the story and its production.  Also included are reflections from Seth McFarlane, who shares his memories of wearing out his VHS tape that summer, and Mark A. Altman who reminds us of the behind the scenes details of the time and that there was a slim (very slim) possibility the show sacrifice Picard to the Borg.  Running at just under thirty minutes, I found myself engrossed enough in it that I wished it had gone on longer simply because I love the story that much and was eager to learn every single detail I could about it.

Luckily, there’s still a commentary by director Cliff Bole, actress Elizabeth Dennehy and the Okudas to help feed that hunger and give some more details and insight into these episodes.   Also included is a gag reel with some amusing outtakes and actors flubbing technobabble.

And it’s the extras alone that will probably be worth your time and investment in this disc.   These extras aren’t included on the season set and while it is a double dip, it’s worth it.     Plus if you pick the disc up when it hits shelves next week, odds are you can find it for a fairly reasonable price.  Or if you’re a Trek fan who doesn’t feel the need to own every episode, this is a nice alternative way to own this fan favorite story and to get a taste of just how great these episodes look and sound when converted to HD.  (All you have to do is check out the SD version of the original “Next Time” trailers to see the worlds of difference).   But I will warn you that if you buy this disc, it may hook you that if you aren’t collecting Next Gen on Blu-Ray yet, you’ll be very tempted to open up the wallet for the upgraded sets.