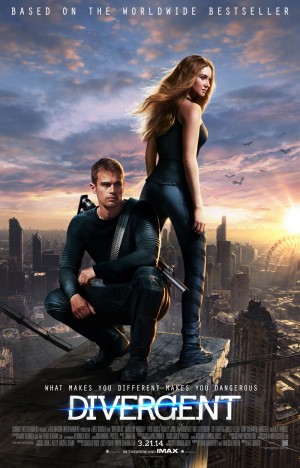 The trailer will be unveiled for the first time on Summit Entertainment’s YouTube channel (YouTube.com/SummitScreeningRoom) at 8:30 AM PT (11/13), followed by a live chat with Neil Burger and top YouTube talent and fans.

Anyone can submit questions to the live stream event by tweeting @Divergent or @NeilBurger, using the hashtag #Divergent.

At 9AM PT, immediately following the premiere of the trailer in the live stream event, the trailer will be available in HD: http://bit.ly/DivergentTRAILER

DIVERGENT Synopsis
In a future world where people are divided into distinct factions based on their personalities, Tris Prior is warned she is Divergent and will never fit into any one group. When she discovers a conspiracy to destroy all Divergents, she must find out what makes being Divergent so dangerous before it’s too late.

Based on the worldwide bestselling novel by Veronica Roth, DIVERGENT is directed by Neil Burger, with a screenplay by Evan Daugherty and Vanessa Taylor. DIVERGENT arrives in theaters & IMAX nationwide March 21, 2014.