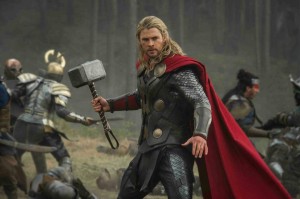 After setting such a high standard with its creative output, we all knew at some point that Marvel Studios would give us a dud.

Up to this point, the biggest creative misstep has been Iron Man 2, but even that one had things to recommend about it.  It looks like the second Iron Man has some company in the creative misstep column with the debut of Thor: The Dark World.

After being pleasantly surprised by the original Thor, I may have had my expectations a bit too high for the sequel.  There are a few moments of The Dark World that seem as if the movie is about to break out and really start humming on all cylinders.   Most of those moments involve Tom Hiddleston chewing scenery as Loki.

Part of the issue with the latest Thor offering is that it spends too much time in Asgard. The first film was about bringing Thor into our world. The Dark World seems to be concerned with opening up the more mythological side of Thor’s universe, with mixed results. Again, any scene with Hiddleston as Loki, whether it be on our world or in Asgard simply hums and clicks on all cylinders. Many of the scenes without him fall a bit flat.

Walking away from the movie, I couldn’t help but wonder if the plot required too much heavy lifting to set up future Marvel installments.  Years ago, Thor’s grandfather defeated the Dark Elves.  While it was reported that they were defeated and a super power called the Ether was destroyed, turns out it was merely stored away and the leader of the Dark Elves sent into exile.   Well, he’s had years to heal up and wouldn’t you know it, but Jane stumbles across and becomes possessed by the Ether. Thor brings her to Asgard to try and find a cure, which leads to an all attack on the city by the Dark Elves.   Thor is forced to do the unthinkable in order to protect Asgard and save Jane — join forces with Loki and try to lure the Dark Elves to the Dark World.

Part of the issue with The Dark World could be a transition in directors. While Alan Taylor has done some solid work on Game of Thrones, he just doesn’t have the same zest and visual style that Kenneth Branagh brought to the first one. Branagh knew how to inject life into scenes of heavy dialogue and scenery chewing by his cast, thanks to his background in Shakespeare. Taylor has a solid background in visual spectacle from Thrones and The Dark World is visually stunning. However, it lacks some of the heart of the original or even The Avengers.

That’s not to say it’s a bad movie, per se.  It’s just a step back from the usual level of excellence that Marvel has achieved with its last several releases.

And it should come as no surprise that the movie requires you to stay for the entire closing credits.  There are two post-credits sequences.  So sit back, relax and mock those who foolishly leave a Marvel movie as soon as the credits begin to roll.