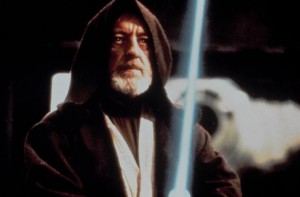 An iconic feature of the Stars Wars universe is a step closer to becoming a reality.

New scientific research shows that a real-life lightsaber may not an impossibility after all.  Scientists at MIT and Harvard have reportedly found a way to bind together particles of light in a way that resembles lightsabers features in the Star Wars universe.

“Most of the properties of light we know about originate from the fact that photons are massless and do not interact,” Harvard physicist Mikhail Lukin said.”What we have done is create a special type of medium in which photons interact with each other so strongly that they act as though they have mass and bind together to form molecules.”

Lukin said in a statement that the light saber comparison is appropriate because the photons — particles of electromagnetic radiation — push against and deflect each other.

“The physics of what’s happening in these molecules is similar to what we see in the movies,” he adds.

The scientists published their findings in the October edition of Nature.

And while we are a step closer to making the lightsaber a potential reality, that doesn’t mean you should start looking for one on shelves for the upcoming holidays.