Jurassic Park 4 has a new title.

The film, set to roar into theaters in 2015, will now be called Jurassic World.

Colin Treverow is on board to write and direct the film.  He was share writing duties with Derek Connolly.

Beauty and the Beast has added actress Amber Skye Noyes for its sophomore season.

According to TVLine, Noyes will play the daughter of a powerful beast in the CW drama.

Her character Tori – described as “seductive” – is rescued by Cat  and Vincent and falls under their protection.

Annie Ilonzeh was also recently cast on the show as Beth, a journalist and old friend of Cat.

A new trailer for the upcoming American Horror Story: Coven has been released.

The Emmy-nominated drama series returns to FX on October 9.

The third G.I. Joe installment has found a new writer.

Evan Daugherty will pen the screenplay for the third film.  John Chu will return in the directing chair.

Daugherty’s previous screen credits include Snow White and the Huntsman.

How cool would this have been?

Actor Hugh Jackman tells the Huffington Post that he was on the set of Sam Raimi’s 2002 Spider-Man for a cameo role as Wolverine.

“In the first Spider-Man – Kevin Feige reminded me of this – we really tried to get me to come on and do something, whether it was a gag or just to walk through the shot or something,” Jackman tells the paper. “The problem was, we couldn’t find the suit. The suit was stuck in something. And so when they were in New York when I was there, we couldn’t get it together.”

The actor says he’s still open to a crossover appearance, possibly in a future Spidey installment with actor Andrew Garfield.

And speaking of X-Men thespians, actress Ellen Page says that she’d love to see her character Kitty Pryde her own spin-off film.

This comes on the heels of Avengers director Joss Whedon saying that Pryde deserved her own solo effort.

Speaking to Vulture, Page says, “I’m super grateful to be the actress who’s gotten to be her, and you only desperately hope that the true fans who have a right to demand what they want and who have been passionate about these stories for a really long time, that you can pull it off for them. I would be so thrilled to play Kitty Pryde again. I really would.” 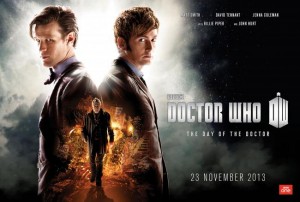 November 23 will be the Day of the Doctor.

The BBC announced that will be the title of the 50th anniversary special, which is set to air later this year.

The BBC will devote much of its programming day to the famous Time Lord. Here is a quick rundown of what fans can look forward to:

The BBC also issued a teaser poster that we’ve included above.