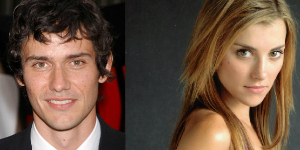 Two new faces will arrive in Haven for the upcoming fourth season.

Actors Christian Camargo and Emma Lahana will join the Syfy series this year.

Camargo is best known for his work on Dexter and will play the estranged half-brother of Haven mainstay Duke Crocker. The character is described as charming, driven and slightly devious successful and good-natured businessman at the top of his game. However, Wade is a Crocker through and through and could be tempted by a dark and lethal family secret that could be his undoing.

Lahana appeared in Hellcats and will play Jennifer Mason, an eccentric, energetic and off-kilter woman pulled into Haven’s mysteries when she beings hearing strange voices in her head. They lead her to cross paths with a town fixture who suspects her “condition” could provide clues about Audrey’s whereabouts. As Jennifer digs into her own personal history, she learns she may have a bigger role to play in the strange happenings in Haven.

They will also join actor Colin Ferguson as new additions for the upcoming season. Ferguson will have a recurring role.