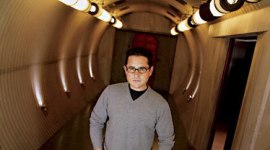 If things go as planned, J.J. Abrams says that filming on Episode 7 of the Star Wars saga could begin by the end of the year.

Speaking to the Hollywood Reporter, Abrams says he plans to respect the long history of the franchise but won’t be held hostage by reverence to it.

“It is so massive and so important to people,” he said. “I think the key to moving forward on something like this is honoring but not revering what came before.”

Abrams won’t tell anyone if or how much of the expanded post-Jedi universe from the novels will be used in the upcoming films.