The SyFy Channel has been stepping it up of late giving us reason to begin reconsidering the cable network as a friend of the scifi genre and no longer simply a wannabe. Could it be the current leadership in the big office is finally someone capable of understanding that if you claim to the a science fiction channel it’s time to actually produce some good genre programming? It would certainly appear that is the case, at least at this juncture.

Tonight the return of Continuum marks the show’s second season here in the U.S. and is one of the better imports on SyFy. Of course the jewel in the crown right now is Defiance which continues to marvel each week. It got off to a rather slow start but has picked up steam with the story writing and character development being some of the best on television today. Of course, SyFy’s leaders, Warehouse 13 and the Americanized version of Being Human continue spiraling upward. It was, however, sad news that Warehouse 13’s episode count for the next and last season has been pared-down to only five, but I have no doubt they will be unforgettable. 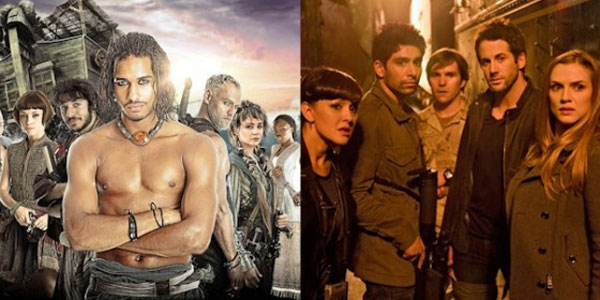 Two new SyFy ventures will premiere on Saturday June 8. They are Sinbad and the highly anticipated sequel to the British hit Primeval titled Primeval: New World.

Sinbad takes place in the 7th Century C.E. and continues with the Arabian Nights tales. One of fantasy’s most legendary characters, Sinbad, will once again come to life in viewer’s living rooms in this exciting new series.

After Sinbad accidentally kills the son of powerful Lord Akbari, he is forced to flee — under a curse — from his home town of Basra. Now unable to be on dry land for more than a day (thanks to the curse), Sinbad must travel the world to find a cure and return home. On board his new home – the ship, The Providence – an intriguing band of travelers are thrown together, including a Norwegian sailor named Gunnar, a young jewel-thief called Rina, and the aristocratic Nala. Completing the ship’s complement is an odd-ball cook and the ship’s doctor named Anwar. The whole time Sinbad is sailing the oceans to pursue his freedom from the curse he is also being hunted down by Lord Akbari. The exotic cast of actors for this new fantasy adventure includes new heart-throb Elliot Knight as Sinbad, Dimitri Leonidas (Doctor Who), Marama Corlett (The Devil’s Double), Elliot Cowan (The Golden Compass), Estella Daniels (Da Vinci’s Demons) and Tuppence Middleton (Tormented). However, the casting catch of note for this show is the addition of Naveen Andrews of LOST and The English Patient fame playing the role of Sinbad’s nemesis Akbari.

Primeval: New World moves from the streets and backwoods of England and follows a new team of predator hunters now located in the city of Vancouver and into the wilds of Canada. New anomalies in time/space have broken through in Canada and it is up to the new Primeval team to hunt them down and try to get them back to their proper timeline in history.

Inventor Evan Cross leads the team that includes predator control expert Dylan Weir, security specialist Mac Rendell, and physics prodigy Toby Nance. Ange Finch, Evan’s oldest friend and business partner, keeps HQ at Cross Phonetics afloat while Evan and his Special Projects Group track escapee dinosaurs and other weird creatures. The team is also helped by Lieutenant Ken Leeds, head of the government’s decommissioned department for investigating alien life and other mysteries — which now includes these new Anomalies. The cast of Primeval: New World is headed by actor Niall Matter in the role of Evan Cross. Matter is no stranger to the genre or the SyFy Channel. He has starred in Warehouse 13, Stargate Atlantis and most fans will remember him as Zane Donovan from the fan hit series Eureka. Supporting cast lineup is impressive with Sara Canning (The Vampire Diaries), Danny Rahim (Eastenders), Crystal Lowe (Smallville), Miranda Frigon (Dexter) and Geoff Gustafson (Supernatural).