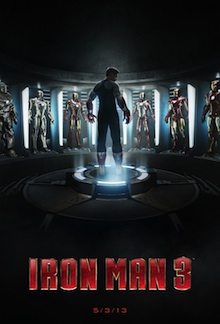 Iron Man 3 is one of the darkest superhero movies I’ve ever watched. Not dark in appearance or gritty as in the recent slate of Batman movies by Christopher Nolan. No, this movie addresses the darkness of the human spirit, as presented by its two main characters, our protagonist (Tony Stark) and our antagonist (The Mandarin).

The evolution of the Iron Man franchise is beautifully played out here. Just when Tony feels he has reached a rock bottom from the Palladium poisoning he’s suffering from in Iron Man 2, he realizes that the bottom he thought he had hit is far deeper now than he had previously realized. This new low isn’t from something medical or chemical, as he had previously battled. No, this is from within. He’s now tortured by certain recent events in his life which have unleashed a horde of personal demons, all the while forcing to deal with demons he created from events in his life that pre-date the first Iron Man film.

The movie gives us a true feeling of a full circle, starting with a New Year’s Eve celebration from 1999 where we meet a familiar face from the first movie, and will become an even more familiar face in Tony’s very near future. We are also introduced to other key moments and players as presented to us by a voiceover from Tony himself. Through this flashback we are reminded of the man that Tony Stark used to be, of the change that Tony had undergone to become the much adored hero Iron Man, as well as a very stern reminder that karma is truly a very mean b*tch, and that sooner or later, you will pay her in full. Now it is Tony’s turn to pay the piper.

We are given the face of true evil in the terrorist known as The Mandarin. He might seem at first to be two-dimensional to some, but to others he represents something that is very real, a man with ideals and values that are alien to most, and he’s not afraid to demonstrate how strongly those alien ideals are. For myself, I found The Mandarin to be very disturbing only because the truthfulness of his personae. While this Mandarin we get in the movie does not entirely reflect the character in the comic book, his evil feels very real. He does not come off as a caricature, rather he feels fully realized as a character in this study of identity and psyche.

The threats that Tony has to face at times come on like an endless onslaught, leaving the audience gasping for air as if they had to face these threats themselves. In the midst of all this horrific turmoil and tragedy Tony is faced to fully look within, much in the same way he sheds a damaged suit shortly after having faced such a terrible moment, Tony must peel back the layers of his crusty exterior and face the demons that are within him if he is to succeed. In the end, it becomes all about Tony Stark having to face down the evil that threatens to not only kill him, but also rob him of that which he values most, Pepper Potts.

For the most part almost all of the characters are quite two-dimensional. This is a comic book movie after all and not a work by Shakespeare. Don Cheadle carries the role of Colonel James Rhodes with the same level of confidence he gave us in the last film, but plays on the sense of familiarity, both as a wearer of the Iron Man suit (War Machine/Iron Patriot) and as a member of this popular cast. Pepper Potts’ Gwyneth Paltrow continues to delight audiences, and even though this part isn’t up there with past roles in movies such as Shakespeare In Love or The Talented Mr. Ripley, what she does deliver reminds us of why she is an Academy Award winning actress. It’s not the greatest role in movies, but she still plays it integrity. Jon Favreau is back as Happy Hogan, and while his role isn’t very big in this movie, he still manages to own each scene with his unique brand of comic relief. Aldrich Killian, as played by Guy Pearce comes off as a smarmy user of people. I chose those words carefully for a reason. Remember them when you see this movie.

The big surprise is Academy Award winning actor Ben Kingsley as The Mandarin. At first I found it puzzling that an actor of his caliber would want to take on such a role. He does manage to deliver his threatening speeches in a very measured manner that gave the character a true sense of unnerving conviction. However, it is through a rather surprising revelation (which I will not spoil here) that it became abundantly clear as to why this great actor agreed to be in this movie. I saw this revelation coming, and yet when it did, I was completely taken by surprise. It is through Kingsley’s acting that it worked.

Lastly, there is Robert Downey Jr. as Tony Stark. With his past three performances as Stark (the two Iron Man movies as well as The Avengers) we saw a performance that played to Downey’s strengths. He’s a quirky man with an equally quirky sense of humor. It could almost be said that in those earlier movies he was playing himself. Not so here. All the events in Tony Stark’s life have set him on a path that was almost destined to take him to a very dark place, and Downey gave us that dark portrayal with brutal sincerity and honesty. Through his performance this movie is elevated from being just another summer blockbuster adventure film, to a movie with a true dramatic study of the various aspects of human nature. He gives us a character that has bottled up his demons and refuses to address them. Instead he distracts himself by working on more Iron Man suits. They serve as a brilliant metaphor for the layers upon layers Stark heaps on those internal demons so that he doesn’t have to notice they are there. However, as with all caged things that yearn to be free, his demons start to push their way out and the only way he can deal with them is by shedding himself of all his exterior baggage, just as he does when we see him exit his Iron Man suit, not just physically wounded, but also emotionally raw and damaged. It is here that Downey really shines. He still gives us the snarky Stark we all know and love, but he shows us his vulnerability as well, and it is this Stark who will come face to face with The Mandarin in a showdown that will undoubtedly raise the bar for any future superhero movie that is to be made.

There had been reports of two post-credit Easter Eggs. At this viewing we only got one and it came at the very end of the credits. I highly recommend sticking around for it. Trust me, you will not regret it! As for the movie itself, it’s a winner, and gives a positive message for those who are currently battling demons of their own. In the end, it is Tony Stark himself who sums it up quite clearly when he says, “I am Iron Man,” not because he wears an armored suit, but because of his intelligence, his determination, and his spirit. Those are the qualities that make him Iron Man!