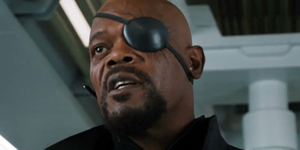 Samuel L. Jackson will be returning to ABC’s Marvel: Agents of S.H.I.E.L.D. for another cameo in the show’s season finale.

Rumors ran amuck since the start of the new direction of the show after its short hiatus and now Jackson has confirmed it in an interview with Vulture. “…I shot the end-of-the-season show,” stated Jackson.

The comic book role of Nick Fury, every S.H.I.E.L.D. agents big boss, was first introduced to Marvel movie fans when Jackson put on the leather jacket and eye patch during the rolling credits at the end of the first Iron Man movie in 2008. Since that time he has appeared in five Marvel films as Fury and made a cameo on the Agents of S.H.I.E.L.D. television show. He is slated to return in every future Avengers film and is scheduled to have an entire movie based on Nick Fury sometime after the release of Avengers: Age of Ultron in 2015.

Jackson can currently be seen as Nick Fury in Captain America: The Winter Soldier in theaters across the globe. As an aside it was announced last week that Samuel L. Jackson is the highest box office draw of any actor in the history of filmmaking. That is quite a legacy.