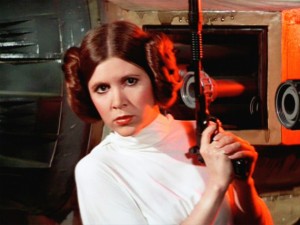 Following up on the recent news that Harrison Ford will be back in the Falcon as Han Solo for the new Star Wars movie, actress Carrie Fisher has now confirmed that she has also signed on to reprise her role as Princess Leia in the J.J.Abrams helmed film.

In an interview with Palm Beach Illustrated, Fisher simply answered “yes” when asked if she would be joining the feature. In response to a query about what she thinks our favorite princess is like now she responded, “Elderly. She’s in an intergalactic old folks’ home [laughs]. I just think she would be just like she was before, only slower and less inclined to be up for the big battle.”

While the studio has yet to confirm much besides Abrams as director, rumors abound and with a tentative release of 2014 production will have to begin soon.