Gary Mitchell, Robert April, Khan. Those are just some of the potential names that Benedict Cumberbatch could be playing in Star Trek Into Darkness.

For months, the identity of his character has been kept tightly under wraps.  But it appears that EW may have let the tribble out of the bag in an advertisement for this week’s issue.

Stop right here if you don’t want to know more….even though it’s only a rumor and should be taken with a grain of salt. 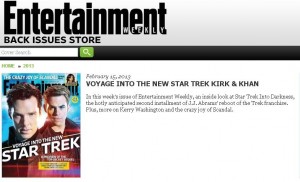 Looks like the Batch is playing Khan after all. Are you excited? Disappointed? Not putting any stock in this latest rumor? Waiting to see? Let us know in the comments.