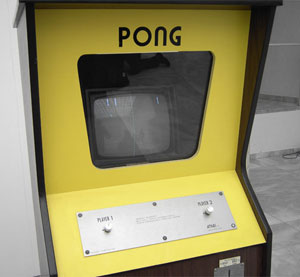 Put down your Facebook and Twitter for moment and pay attention… the company that created the classic games “Pong,” “Centipede” and “Asteroids” — filed for bankruptcy. The genius factory known as Atari U.S. is taking legal steps in an effort to break off the U.S. branch from its cash-strapped French parent company.

CNN reports: “In particular, Atari U.S. is looking to ‘secure independent capital for future growth, primarily in the areas of digital and mobile games,’ the company said in a written statement.

“Over the next three to four months, Atari U.S. will seek buyers for some of its assets, including the Atari logo and the company’s games catalog. Atari as a whole owns or manages more than 200 games and franchises.”

The company got off to a strong start after its founding in 1972, but later lost ground to Nintendo and other competitors, the piece reports. The company has gone through a number of owners over the years.

“France’s Infogrames Entertainment acquired a stake in Atari in 2000, then bought out the company in 2008 and changed its name to Atari S.A.,” CNN reports. “Since then, the rise of casual gaming on PCs and mobile devices has cut into the video game industry as a whole. Atari S.A. has been unprofitable for years, and warned just last month that it will book a ‘significant loss’ for its fiscal year 2013.”

Atari U.S. said it will ‘conduct its normal business operations’ during the bankruptcy proceedings.

So here’s your chance to help solve the global economic crisis. Grab your joystick, so to speak, and start playing Asteroids again! Sharpen your Centipede navigation skills and prepare for Pong so you will be ready for new Atari products in near future. You may want to save up a lot of quarters!