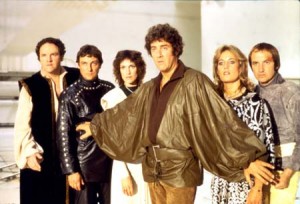 SyFy is looking to reboot another classic genre franchise.  This time around the cable outlet will team with Georgeville Television to produce a reboot of the 70’s classic Blake’s Seven.

The project has a script by Heroes writer Joe Pokaski and Casino Royale director Martin Campbell attached to it. The project was shopped to US networks last  month by Georgeville, the independent TV studio co-founded earlier this year by Leon Clarance of Motion Picture Capital, the financing arm of Reliance Entertainment, and producer Marc Rosen.  The project  has a script-to-series commitment, meaning that if Syfy likes the script, it will greenlight the project as a 13-episode series.

Originally created by prolific British TV writer Terry Nation (Dr. Who), Blake’s 7premiered on the BBC in 1978, running for four seasons. Referred to as “The Dirty Dozen in space,” the series centered around hard-core renegades and criminals who escape from a prison planet, battling humans and aliens alike – and becoming heroes. Despite its no-frills, low-tech special effects, Blake’s 7 was an international hit and still enjoys a fan following a quarter of a century after its launch.

Maybe the series potentially returning on SyFy will see the long awaited region one DVD release of the original series.