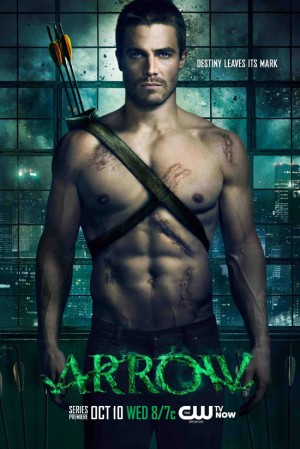 While it’s based on a comic book character, producers Marc Guggenheim and Andrew Kreisberg don’t see Arrow as a super hero show.

The producers say they’re taking a page from Christopher Nolan and his take on Batman when it comes to Arrow.

“We see it as more like a crime thriller. It’s designed to appeal to comic book fans, obviously. That’s why we’re putting in all the Easter eggs and everything. But it’s also designed to appeal to a much larger audience,” Guggenheim tells The Huffington Post.  “The most gratifying thing that I hear is from a lot of women, quite frankly, going, “I did not expect to like this show, but I really liked it.” The phrase I hear a lot is, “It’s not for me but I loved it.” I’m like, well it is for you. There’s character and there’s heart and there’s emotion and then there’s a lot of soapy elements. It’s totally for you. But that’s not what people expect when the poster is a guy in a hood with a bow and arrow. That’s the appeal of the show.”