Warning: If you haven’t seen the last few episodes of Game of Thrones, there are SPOILERS for all of them, including last night’s season finale, ahead!  If you don’t want to know what happens, turn back now! 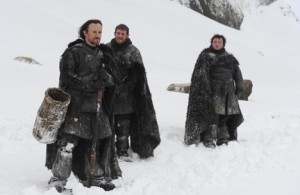 The second season of Game of Thrones began with the show journeying from one end of Westeros to the other.   The second season finale served as an appropriate bookend to the season as it also journeyed far and wide across the universe of Westeros, wrapping up a few plot points and putting the pieces into play for the epic third season (that can’t get here soon enough!)

Over the course of season two, we’ve seen the epic power struggle unfolding across the landscape of Westeros.   And once again, power bases seemed to be shifting as season two draws to a close.

After his grandfather saved his bacon in the epic Battle at Blackwater last week, Joffrey appears to have a firmer grip on the Iron Throne than ever before.  A lot of that is thanks to his mother, Cersei, who apparently can do more behind the scenes manipulation before breakfast than most of us can do in an entire week.  Cersei able manipulates her son to dump Sansa and solidify his power base by marrying Margaery, the widowed and virgin bride of his rebel cousin, Renly.   Of course, this power grab also helps certain other players at King’s Landing–namely Maester Pycelle and Littlefinger, who are clearly part of Cersei’s manipulations of her son.   It should be interesting to see if and how Margaery and Cersei clash in trying to pull the strings for young Joffrey in future seasons.*

*Again, if you’ve read the books, don’t reveal any of what’s to come!

Cersei is also able to remove another thorn her side, switching our Tyrion for her father as Hand of the King.  And while it can be argued that Tyrion did just as much, if not more, to preserve and protect King’s Landing than his father did, in the end it will be the more dramatic riding in at the last second to save the day that will be remembered by the people and history than any of the strategy and plotting Tyrion did. The scene when Tyrion realizes that not only is he scarred physically but that everything he’s worked for all season has been taken from him in the blink of an eye was among the best of the episode and season.  And it shows once again why Peter Dinklage deserves an Emmy nod for his work this season.**

** And while he’ll get one, I’ll be surprised to see him repeat.  There are two supporting players from Breaking Bad who will get a lot of buzz plus Mad Men is back.

Meanwhile, Stannis is left picking up the pieces from his failed attack on King’s Landing.  And while he’s taken an epic loss, Melinsandre reminds him he’s playing a longer game and one lost battle does not mean the entire war is lost.  Clearly Stannis thought he’d defeat Joffrey, waltz in and sit on the Iron Throne and then set about defeating the other claims to the throne.   He clearly never thought that Tyrion and Twyin would combine to send him packing and licking his wounds.  Now the marriage of Joffrey and Margaery could see some of his supporters going over to their side, thus eroding his power base even further.

Of course, he may pick up some of the people that Robb Stark has now alienated by following his heart instead of what’s political expedient.  Robb’s marriage to Talisa is likely to create some difficulties for him in the long run, but in the short run he seems happy enough.  It also proves that Robb is his father’s son in how he handles the political game.   Both Ned and Robb are horribly naive in thinking that they can do the right thing and everyone will go along with them because they’ve taken the moral high ground.  It also shows how little Robb understands things and what it means to be a ruler–something we’ve seen all year with his comments about how he doesn’t know how he’ll rule if and when he wins the war.

It should be interesting to see how his grip on power and being a king goes without his mother as a trusted adviser.   As manipulative as Cersei is, I’d argue that Catelyn is just as much a player of the game.  In this case, however, she took it one step too far by freeing the Kingslayer in the hope of reuniting her family.  Again, it’s a Stark with good intentions not exactly thinking through the implications of a plan.

And while this has been a strong season all around, I’d also argue that there were certain storylines that didn’t quite engage me as much as others.  After being fascinated by the events unfolding at the Wall and beyond, I think the show dropped the ball a bit with Jon Snow’s storyline the last few weeks.  I can see where it’s going, but I think it did too much heavy lifting to really get there.

As did the storyline across the sea.  I can see why the writers got Dany to the end point she did, but I’m not sure it was necessarily the strongest way to get there.  Again, this storyline felt like a bit of a distraction in previous installments and while it lead to some nice moments in the finale, I’m not sure it was necessarily the best way to get there.

As a season finale, this one had a lot of heavy lifting to do and it did most of it seemlessly.   We’re given at least five cliffhangers (the image of Winterfell in ruins was one of the best) that the series will have to address as season three begins.  The image of the White Walkers as they head toward the Wall will keep fans buzzing this summer, even if you’ve read the books and know what’s coming next.

As a whole, it was a great season.  There were some stronger stories than others, but Game of Thrones has hit its stride and is consistently one of the best shows on television.  Can’t wait for season three!