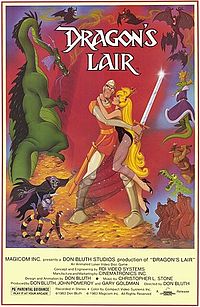 Dirk the Daring is 30 years old, but he shows no signs of slowing down.

The star of the popular 80’s video game Dragon’s Lair along with Princess Daphne, the dragon Singe and several other characters are the star of a new digital comic book from Zuuka Comics.

A new app,  Don Bluth’s Dragon’s Lair Comic App,  converts Arcana’s original published Dragon’s Lair comics — which featured new art from Bluth — to a digital format, plus add sound and music effects for the “iPad generation,” Bluth says. “They’ve done a brilliant job, and we believe it will add to the continued success of the entertainment franchise.”

The app is free, as is the first issue of the comic.  If you want issues 2-6, you’ll have to purchase them.

The app is currently available for iPod Touch, iPhones and iPads.

Also available in the App Store is an HD version of the original Dragon’s Lair game, which debuted in arcades and on laserdisc in 1983. The animation used was groundbreaking at the time, and to date it’s one of only three video games on permanent display at the Smithsonian Institution in Washington, D.C., alongsidePong and Pac-Man.