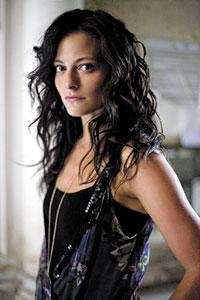 Sunday was April Fools’ Day and with it came a lot of prank stories and jokes.

Among them was a rumor that new companion Jenna-Louise Coleman isn’t taking over as the new companion on Doctor Who but as the new Doctor.   A fan site, Doctor Who TV, posted the rumor Sunday saying that during the upcoming Christmas special, Smith would leave and Coleman would take over.

But before you dismiss that as a crazy rumor (the concept of a female Doctor comes up every time an actor leaves the role), consider this.  UK paper Daily Express reports that Steven Moffat and company are considering who will take over the role when Smith eventually decides it’s time to leave.  And that the front runner for the role is Lara Pulver.

Pulver has worked with Moffat.  She played Irene Adler in the second season premiere of Sherlock.

The information comes from a mole for the Express, who says that the series wants to end the 50th anniversary year with a huge twist.   And a female Doctor would certainly count as that.

Of course, it’s all just a rumor for now and it should be taken with a huge grain of salt.