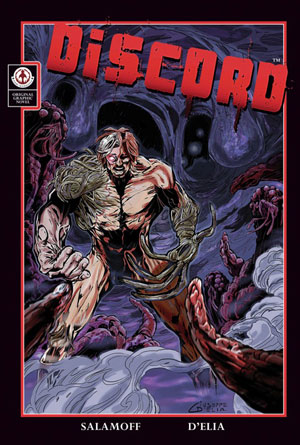 What if Earth’s Greatest Heroes Died? But Were Resurrected as One Man…

After crash-landing on a distant planet, which leaves everyone onboard dead, Chromatic, a member of an elite superhero team, is reassembled and resurrected by the indigenous aliens utilizing useable body parts of his teammates and enemy. As Chromatic deals with the loss of his colleagues as well as his own identity, he must also come to terms with not just who he is, but what he is.

You may be familiar with Paul Salamoff from his work on the LOGAN’S RUN and VINCENT PRICE PRESENTS titles from BlueWater Comics. In DISCORD, a standalone graphic novel from Markosia, he brings us a reimagining of the Frankenstein myth, with a twist.

The monster stories that work the best are the classics, or reinterpretations of the classics, and the story of Frankenstein’s monster is no different. But what happens the monster is created out of an act of kindness, the benevolent need to save a life, no matter what form that life might take? DISCORD explores one man’s answer to the question “Who am I?” when everything that defined his “identity” has been forever altered.

The different questions asked, the different turns the story took, all added to my enjoyment of this graphic novel. I wish I knew more about Team War Hammer before the accident, and part of me wonders what will happen in the aftermath of events in this story… is this a standalone, or could it be an origin story?