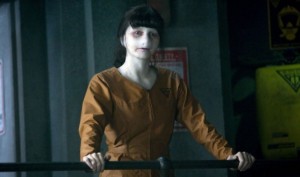 Last year when Steven Moffat took over as producer and show runner for Doctor Who, the buzz was all about seeing what a full season under his guidance might look like.  Most fans agree that Moffat delivered solid results in his first season at the helm and that just amped up the curiosity to if and how Moffat might top himself in his second season as showrunner.

Five episodes into the season, we’ve had one instant classic and a couple of stories that had some potential but maybe came up a bit short.*    Of the swings and misses, this week’s story was the biggest, if only because it’s the first half of a two-part story and it carries a heavy load of exposition and the fact that it felt like a greatest hits compilation of lot of what we saw last year.

*I’m not ready to hit any kind of panic button on the season yet, but I am concerned.   It also helps to recall that I liked most of how Russell T. Davies structured his first season as show runner and then how it slowly became a law of diminishing returns during the David Tennant era.

“The Rebel Flesh” has some interesting moments to it, but they’re all a bit isolated.   The Doctor, Rory and Amy ride a solar wave to a remote island in the near future.  The island hosts a team of people who are harvesting and pumping back to the mainland a highly corrosive acid.  To minimize the risk to the workers, the team members build copies of themselves, nicknamed Gangers.  A second wave of the solar storm hits, knocking out the crew and bringing the Gangers to life and creating a potential conflict between the two sides.

Visually stunning, “Flesh” features some nice location work and some interesting visual moments.  It also offers a few hints there’s something more going on here, at least where the Doctor is concerned.  He tries to get Rory and Amy to not go with him on this adventure and he clams up when directly asked about his real reason for being on the island during this crisis.  There are also some hints about the overall arc of the season, though they feel frustratingly shoe-horned into the story rather than how the hints and clues were distributed last year.**

**At this point, if I see one more shot of that woman watching Amy and see the Doctor looking worriedly at the read-out screen saying she may or may not be pregnant, I may scream.  It’s beginning to feel like Moffat is treading water on this one.  I have a feeling we’ll get some answers in episode seven in two weeks and hopefully it will be worth the wait.

But as visually interesting as the story is and with a few hints sprinkled here and there, the rest of the piece just wasn’t all that interesting.   Large portions of the second half of the episode felt like they were treading water to get to the cliffhanger***.  Then it also felt like we were treading some of the same ground we did in last year’s Siluarian two-parter.  The new Gangers and their right to life and the war coming because of a mis-understanding and the lack of ability of one human being to see the big picture felt like it was taken right out of the second half of the Silurian set last year.  And it’s not like that story was delving new ground itself…

***I called the cliffhanger the first time the Doctor touched the large vat of goopy flesh, figuring somehow we’d get a Doctor duplicate running around.

Meanwhile, we continued a trend of the Doctor being separated from the TARDIS.   Maybe it’s an homage to the early days of the show when a lot of the conflict of the stories came from the TARDIS crew not being able to get back to the ship.   Or maybe it’s my fascination with the classic series and a recent visit back the first Doctor era that’s making it seem more apparent than it really is.

In the end, the story wasn’t exactly thrilling, but it wasn’t exactly terrible.  It was just sort of there.   I didn’t love it or hate it.  And most damning, I’m not all that hooked to see where it all goes next week.

Hopefully the second half can redeem the story.

Leave a Reply to Lejon from Chandler Cancel reply