As the old song says, “It’s the most wonderful time of the year.”

With the holiday season approaching, you may be wondering what is the perfect gift to get the sci-fi and fantasy fan in your life. Well, we have a few suggestions for you. The Slice of SciFi family has put together a list of holiday gift suggestions (whether for you, the genre fan in your life or you just want to treat us!)

Feel free to browse the items listed below and click on a few links. If you buy them via our links, Slice of SciFi and Farpoint Media will get a small portion of what you buy back.  That will help us keep the site and podcast running in 2011.

And this is just the beginning. We’ve got more recommendations coming soon!

Threshold: The Complete Series — This underrated gem about a team of experts gathered by the government to deal with the ramifications of an alien craft crash landing in the ocean was only on for one season but it boasts an amazing cast in the ever hot Carla Gugino, the witty Brent Spiner and the terminally brilliant Peter Dinklage. (Recommended by Sam Roberts)

Battlestar Galactica: The Complete Series Set — One of the most respected and critically acclaimed genre shows of the past few years. (Recommended by Sam Sloan)

Doctor Who: The Complete Fifth Series — Matt Smith plus Steven Moffat equals a pitch-perfect season of the greatest show in the known universe. The best season the series has given us since its triumphant return five years ago. (Recommended by Michael Hickerson)

Torchwood: Season One — If you are like me, you’re suffering during the interminable Torchwood dry spell that we’ve been stuck in since the airing of the brilliant, but oh so short Children of Earth miniseries.  How about we fill the empty space by reminding ourselves why we fell in love with Captain Jack and company in the first place?  The first season of Torchwood is currently very reasonably priced on Amazon and certainly well worth your time & money (Recommended by Sam Roberts)

Firefly: the Complete Series — Joss Whedon’s space western is a must-have if you don’t already. And there’s never a bad time to bring new fans into the fold. (Recommended by Sam Sloan)

The IT Crowd: The Complete Three Season Set — Either we’ve worked with someone like Moss, Roy, Jen or had a boss like Denholm or Dennis. Some of the best British comedy I have seen and situation we can all relate to. The time when Roy and Moss try to fit in by learning to speak to the “regular guys” about football. When Jen is given “The Internet” by Moss and Roy as a joke and no one but the guys get it. Douglas having to wear electric shock pants after his sexual harassment lawsuit…. NEED I SAY MORE?!? Oh and series 4 is due out on DVD on Dec. 14th in the US. (Recommended by Brian Brown)

Fringe: Season Two — Let’s be honest folks: Season 1 of Fringe was good but Season 2 is where it really became great. Besides, who doesn’t want to be able to add a little Walter to their day at a moments notice? If that doesn’t make Fringe required ownage, I don’t know what does. (Recommended by Sam Roberts)

Glee: The Complete First Season — Now I know that not everyone is fond of musicals. So if you don’t like singing and dancing, I suggest moving along. Right. Everyone else, pick this up. The show is great! Top notch writing and quirky, different characters. If you were a choir, theater or band geek, you will get this show on a lot of levels. I’d say even if you weren’t you’d still be able to identify with the jocks who do what they do because it’s easier to be popular than be uncool. I do have nitpicks about the show and some of the parts but it all tends to get lost when Sue Sylvester does her schtick. (Recommended by Brian Brown)

Back to the Future: 25th Anniversary Trilogy — (Recommended by Sam Sloan)

The Alien Anthology — This six-disc Blu-Ray set will set you back a bit, but it’s worth it. Amazing restorations of all four films in the Alien franchise mean this films will look and sound better than ever before. Plus you get two versions of each film per disc. And with over 60 hours of extras, it’s enough to keep an Alien or movie fan happy for several days. As I said when I reviewed it, this may become the gold standard by which other similar sets are judged. (Recommended by Michael Hickerson)

Inception — I loved this movie. Whether you think it’s original or not, you cannot deny the quality, especially of the visuals. This is a must own for me. (Recommended by Sam Roberts) 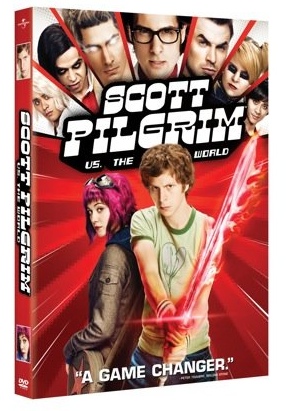 Scott Pilgrims vs the World — I know I’ve geeked about it a smidge on the show. This was a fantastic movie, IMHO. It followed the comics fairly well as movie translation could. The music is great, the effects spot on, full of humour and just a plain old good show. (Recommended by Brian Brown)

Classic Doctor Who on DVD. — As a long-time fan of the show, I get asked a lot about what are some of the best classic stories or box sets for new fans or those who want to visit the stories again. Here’s just a few of my favorite DVD releases. (Recommended by Michael Hickerson)
The Aztecs
Tomb of the Cybermen
Beneath the Surface Box Set (Two classic Pertwee serials, one Davison serial).
Inferno
Genesis of the Daleks
Pyramids of Mars
The E-Space Trilogy
Caves of Androzani
Remembrance of the Daleks

Star Trek: The Complete Second Season (Remastered) — Arguable the best season of classic Trek, this set contains all the episodes from season two with both the original and the updated effects. The remastering on them means they look and sound better than ever. You can’t go wrong with either season one or two of the original series. Sets like this are worth the double or triple dip to own the original Kirk, Spock and McCoy episodes and sold me on why I needed Blu-Ray in my life immediately. (Recommended by Michael Hickerson)