Fans of the classic Batman TV series can celebrate the news that Adam West and Burt Ward will reunite. 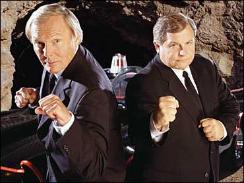 At today’s joint appearance at Wizard’s Big Apple Comic Con, Ward announced that a reality show about his dog rescue operation is in development. Ward said that West might provide voice over for the show.

The last time the Dynamic Duo appeared together onscreen was in the 2003 TV movie Return to the Batcave: The Misadventures of Adam and Burt. The two iconic actors memorably played Batman and Robin in the 1960s.