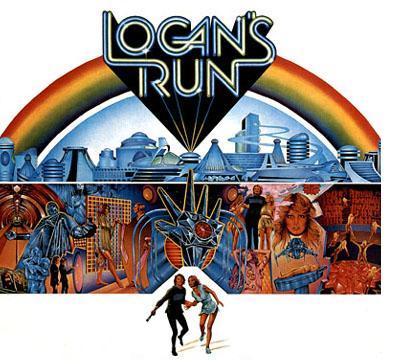 “Sometime in the 23rd century…the survivors of war, overpopulation and pollution are living in a great domed city, sealed away from the forgotten world outside. Here, in an ecologically balanced world, mankind lives only for pleasure, freed by the servo-mechanisms which provide everything. There’s just one catch: Life must end at thirty unless reborn in the fiery ritual of Carousel.”

With those words I went another step further into my love for Science Fiction.

I was already hooked on the genre from reading a wide variety of books and by watching Sci-Fi Theater on Saturdays glued to the television but here it was on the BIG SCREEN!

My folks would bribe my sister to take me to the movie theatre to see whatever I wanted. Normally this was every couple of weeks. She had to sit through many a war movie or crappy action flick with me just mesmerized by the stories unfolding before me. She, on the other hand, wasn’t so thrilled but didn’t complain too much because she would hang out with her friends and knew I wouldn’t move from my seat as long as I had popcorn, some candy and a soda.

Logan’s Run takes place in one of these domed cities. A future in which, when you turn 30 and your Lifeclock (which is a colored gem on your palm) registers a blinking red, you must report to Carousel. Carousel is a ceremony which promises Renewal for those who participate. It’s a high tech reincarnation…or is it? Who cares! Life is a party until you hit 30 and that is SOOOOO far away! Right??

Logan 5 is a Sandman. Sandmen kill anyone who decides NOT to go to Carousel and decide to run instead. Where are they running to? Who cares! They must be eliminated!

Logan’s partner is Francis 7. They are both attending that evening’s Carousel when they are called to eliminate a runner with their GUNS THAT SHOOT FLAME when you pull that trigger!! I SOOOOOO wanted one up until Star Wars came out but I digress.

After taking out the runner Logan collects the effects of the deceased they call it a night because why work that extra time when there was partying to be done! Logan looks for some action on The Circuit and meets Jessica. They have a conversation about what it’s like to be a Sandman and the legality/morality of running when your time is up. Jessica decides that she made a mistake and takes off leaving Logan alone but not for long! Francis, being the good wingman that his is, shows up with the ladies in tow and the fun starts in a haze of pleasure smoke.

Back on the job, Logan turns in the items he had retrieved off the runner from the previous night. This begins a whole Q&A session with the computer in charge of the Sandmen. It all centers on the ankh and how this is the symbol for “Sanctuary”. The computer sends Logan on a mission to find Sanctuary and destroy it. It advances his Lifeclock so it is expired and blinking thus giving him a way to infiltrate Sanctuary. Logan asks if he’ll get any help – Silence from the computer. He asks if after he succeeds if he’ll get his Lifeclock reset back to his normal time and is again greeted with silence.

It was at this point I was like “DANG! He was just screwed by THE MAN!! Er.. COMPUTER!”

Logan remembers Jessica having an ankh around her neck when they first met so he looks her up and begins to ask about Sanctuary. Jessica is very skeptical because Sandmen don’t run. Just at that time Logan gets a call about a runner in the Cathedral area. The Cathedral is where the Cubs roam. Cubs are feral, vicious children = bad for everyone. Logan and Jessica find the runner after Logan has a scuffle with a pack of the Cubs. He shows her his blinking Lifeclock and lets her go. Unknown to Logan, Francis sees this and after Logan has gone, kills the runner.

Logan’s kindness convinces Jessica and she confesses that really she had been setting him up to be killed. She ends up taking Logan to New You, which is a place where you can change your hair, face, body, everything.
Logan decides to get a new face in an effort to hide. Doc gets a call from someone telling him to kill Logan.

Crazy tech and effects when they show how the lasers can cut and then you’re instantly healed with the mist that comes afterwards. I must say GREAT bit part of Holly played by Farrah Fawcett in all her 70’s glory.

Doc tries to kill Logan with his machine but Logan turns the tables on Doc and an epic fight in the surgery room ensues with lasers flying about! Logan kills Doc. Logan and Jessica take off with Francis soon in pursuit.

I loved the spears that put out some sort of burning gas and the intense light interrogation of this scene.

Suddenly Holly shows up, finally remembers correctly that Logan is being pursued by the Sandmen. Convinced they let Logan and Jessica pass. Telling him to go to the end of the tunnel and he’ll get more instructions. Jessica wants to go with him, Logan tries to convince her to stay but she wants to go.

The Sandmen break in and all hell breaks loose. Logan and Jessica escape into what appears to be fish and algae tanks that were used to breed fish and algae. Eventually Francis catches up and they have a show down in which Logan reveals his blinking Lifeclock to Francis. A fire fight happens and the giant tank is ruptured washing Logan and Jessica down the tunnel. They reach the elevator which takes them up… up and up into the frigid cold.

They find some furs and run into Box. Box’s job is to preserve, “Fish and plankton, sea greens and protein from the sea.” Oh and one little catch, anyone else who shows up! Yeah that means you two!!

Logan zaps Box and of course everything else comes falling down. They escape from the falling down ice and blocks into the outside illuminated by a GINOURMOUS SUN!

Of course they are suitably freaked out by this since neither has seen the world outside of the dome.

So they wander about, swim, eat berries and Jessica finally realizes that Logan is the MAN FOR HER! Yadda, yadda, who cares! Where is the fighting! Oh everyone’s Lifeclock are clear. It must be all that clean living outside of the dome that does that.

Okay this review is getting as long as the movie is and it’s a long one clocking in at 119 minutes. Think about being a kid and sitting through that! Honestly I don’t remember it really dragging until the end when you get to all the deep philosophical bits.

So they meet crazy old cat man, discover there isn’t a Sanctuary, and Francis shows up again. Francis tries to rape Logan’s woman, they fight and Logan kills Francis with a flag pole flying the American flag.

They all head back to DomeCity™. Old man can’t get in the way they go. He hangs out. Logan and Jessica go back, cause a ruckus, and get captured. While being interrogated by the computer they cause it to have a loop of some sort, things go kerblooie! They escape and cause more havoc and chaos! City blows up! People wander out to find Logan and Jessica and the crazy old cat man. Everyone marvels at his craggy skin! HOOORAY Life away from utopia…. ?

Yeah, I didn’t really understand the message until much later myself. I was much more enamored with the futuristic tram, the guns, the computers, etc.
This movie still ranks in my top 20 of my favorite films. Yes it’s dated , has plot holes the size of the moon and the ending drags more than a two dollar muffler job BUT it’s still an amazing piece of work. The effects alone, for the time, were ground breaking. The sets weirdly futuristic. The music synth future styled and creepy while in the dome then changing to regular orchestration when outside of that.

Now the movie is vaguely based on the books by William F. Nolan and George Clayton Johnson. It’s my understanding that they have very little in common. I’ve never managed to find a copy of the trilogy to read so I can only go by the articles I’ve read myself.

Our listeners also might remember our interview with Paul
Salamoff (Show #259) who is doing the recent Logan’s Run comic book series. That series draws more on the books than anything else that has been done. SO you might want to pick them up and give them a whirl. Trust me, they are COMPLETELY worth it!

So all in all – I think Logan’s Run should be part of everyone’s well rounded sci-fi experience. So go out and give it a watch again or for the first time if you haven’t ever seen it.

Brian Brown is a co-host of Slice of SciFi. He has also appeared on the Kick-Ass Mystic Ninjas and Dragon Page Cover to Cover podcasts.