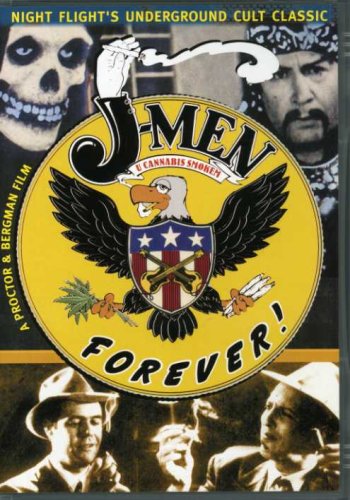 J-Men Forever is a comedy cult classic originally released in 1979 (although Netflix will tell you 2002). The latter date is impossible since I recall watching it on the USA Network series Night Flight in the mid-80s. This was also the time my sense of humor was being shaped by content like Dr. Demento so you can see where J-Men fits in. At the time, my parents had just gotten a large VHS recorder (front load, not top load) and much like people of that era with new tape decks recorded content from the radio to play in their car, I was trying to record as many TV programs on the precious few tapes we had. J-Men Forever was one of those key items I happened to have recorded. Though, try as I might to keep it from getting recorded over, I was only able to watch it about four times with my friends before it was lost.

As the years went on I tried to find it on TV or in a used video store, but nobody ever seemed to have heard of this strange and unique film. At last Netflix came along – the great Wikipedia of films. When I got my first Netflix account and discovered they had J-Men Forever, this movie was right at the top of the queue! When it arrived, I made sure to introduce my oldest daughter to it, since we share a similar sense of humor and she’s just about the same age as I was when I first saw it.

The film is mostly constructed from a hodge-podge of old Republic serials from the 1940s starring such characters as Captain America, Captain Marvel, and several others rebranded as “Lone Star”, “The Caped Madman”, “Rocket Jock” and more (aka the J-Men.) The clips are overdubbed with new lines revolving around a plot where the evil villain “The Lightning Bug” attempts to take over the world from his moon base with rock and roll. When that doesn’t work, he tries sex and drugs. The Lightning Bug is voiced over by legendary radio DJ M.G. “Machine Gun” Kelly with some additional reverb for effect. During the opening credits, The Lightning Bug is shown as five different villains from the previous films. While the eclectic array may seem confusing, the lead baddy states “I’m bringing all five of my costumes!” Don’t worry – it works.

Tying all these disparate movies together are a few original clips filmed in black and white starring Peter Bergman as “The Chief” and Philip Proctor as “Agent Barton” (both veterans of Firesign Theater). The Chief and Barton work for the FCC (Federal Culture Commission) who try to crush The Bug’s plan with MUSAC (the Military Underground Sugared Airwaves Command), and a bomb to blow up The Bug’s secret moon base. I won’t tell you how that turns out.

Throughout the film are snappy one-liners and Mystery Science Theater 3000-style quips (by the actors themselves) that will keep you laughing. The movie soundtrack features tunes from Budgie, The Tubes, Head East, and Billy Preston – not the ones you might be familiar with either!

Like the original serials, the various heroes appear to be destroyed at the hands of the Lightning Bug, however the film is closed with Agent Barton going over the list of those who died, only to be followed by “scenes from next week” showing how each escaped their particular peril. It was cheesy then, and it’s still just as cheesy.

This movie is not for everyone. If you like Mel Brooks-esque humor with a dash of MST3K on top of classic serials’ bad effects, you’re going to love it. I may be over romanticizing J-Men because it was so original and edgy in the 80s. Several reviewers have similar feelings back-in-the-day and say it doesn’t hold up as well in the post-MST3K era. I look at them as two different types of foolery. J-Men is done IN the movie, whereas MST3K is done TO the movie.

Netflix classifies J-Men as “This movie is: Goofy”. I won’t disagree there. It certainly made an impact on me and continues to resonate through some of my works like Technorama. Technically, J-Men Forever is not even sci-fi, but rather old sci-fi re-hashed in to humor. Just one warning, this is one of those movies that will leave you quoting (or singing) silly lines for years to come. I’ve even been recorded on an episode of Slice of SciFi singing a song done by “The Lone Star” while riding his motorcycle. At least I made Summer laugh. I’m sorry there were never more movies made in this style. Perhaps the ailing Hollywood re-make machine can take a stroll down the “goofy” aisle of the rehashed grocery store at some point and warp the minds of a new generation with a puree of old movies coated with silly overdubbed dialog. Bring it on.

Chuck Tomasai is the host of ChuckChat Technorma. To find out more about the show or subscribe, visit the ChuckChat home page.