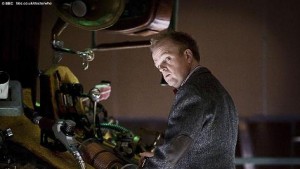 When he took over the reigns as show runner, Steven Moffat said that in his mind, “Doctor Who” was the story of the companion and their journey through time and space. No where is that more evident than in the latest installment of the modern series, “Amy’s Choice.”

“Amy’s Choice” is about the title character growing up and being forced to choose between her two men–the fantasy man she’s dreamed of since she was a child in the Doctor and Rory, the more down to Earth man who wants to settle down with her and build a life together.

One possibility finds the Doctor, Rory and Amy trapped in the TARDIS, falling into a cold star and slowly freezing to death. The other finds Amy and Rory married, living in a village where Rory is now a doctor and they’re expecting their first child. The Doctor turns up for a visit and soon discovers there’s something sinister going on in the village.

Into this comes a mysterious figure called the Dream Lord, who presents the scenario to the TARDIS crew. The trio shuffle back and forth by falling asleep in one reality to the tweeting of birds. Interestingly, time passes in each scenario while the various players are asleep, giving the final moments of their episode a ticking clock to ratchet up the intensity of things as Amy is forced to choose one reality over other other.

As with all the other stories of the Moffat era (so far), what “Amy’s Choice” gives us is an interesting idea fully explored and expanded to its fullest. Watching both realities unfold, there are arguments for and against both being the real world and the dream world. And seeing Amy forced to choose between them is nicely done, especially given the tension from last week’s storyline between the Doctor and Rory and the way in which Amy announced she was content having her “two boys” at the conclusion of events last week.

The choice, and more importantly how Amy arrives at the choice, is a fascinating one, especially given the implications of who and what the Dream Lord is. The story does a nice job of offering hints that the Doctor’s knows who the Dream Lord is and then paying that off in the end. It also has some fascinating implications and a nice potential homage to one of the more intriguing villains of the classic series.

The convention of having various elements from a typical “Doctor Who” story play into each scenario is also nicely done. In many ways, the story serves as a commentary on the typical aspects of what makes a “Doctor Who” story and serves as a bit of a satire of the program itself. It’s similar to what the “X-Files” did with classic episodes like “Jose Chung’s ‘From Outer Space'” or “Clyde Bruckman’s Final Repose.” By examining the conventions of the show, you get a greater understanding of the characters.

And the implications of who the Dream Lord is are fascinating and hopefully a threat Mofatt will pick up again in the future. (If you’re a classic series fan, you may find yourself thinking of the Valeyard….I certainly did).

Once again, Moffat and his writing team, deliver a solid, fascinating and compelling episode. It’s helped greatly by solid performances by Matt Smith and Karen Gillian as well as solid work by Arthur Darvill as Rory. In many cases, Darvill steals the show with his nuanced work as Rory here.

Certainly the script pushes Rory out of the shadow of Mickey and makes him something more interesting. Rory may be the best male companion the new show has produced.

And then, there’s the preview for next week…the story I am most looking forward to seeing.