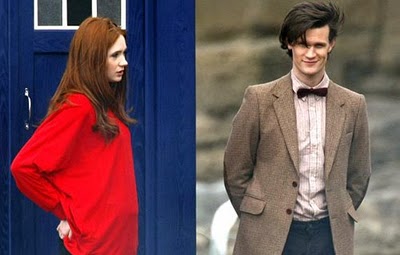 Now that the David Tennant/Russell T. Davies era is over, “Doctor Who” fans are turning their attention to the Matt Smith/Steven Moffatt era.

And beginning to wonder just which familar faces will be back for series five.

Thankfully, it appears that “The End of Time, Part 2” will be the last time for a while that we see Rose, Mickey and many of the other Davies era recurring cast. But that doesn’t mean we won’t see some other returning adversaries.

There are SPOILERS ahead….you have been warned.

If you’ve seen the one minute preview, you know the Daleks are back (in a story with Winston Churchill) and the Weeping Angels will return.

But other classic adversaries could be on the docket according to the rumor mill.

Speculation and reports indicate that the Cybermen will be back for the season finale.  These Cybermen would be the ones from our universe and not the ones created in an alternate universe created  in series two.    There’s also a rumor that one of two sets of reptillian creatures from the Jon Pertwee era may return–either the Silurians or the Sea Devils.

Of course, right now this is all speculation and rumor.  And we’ve been hearing for the past couple of seasons that the Silurians and/or Sea Devils would be part of the upcoming season.   So take these rumors as just that until we get official confirmation.