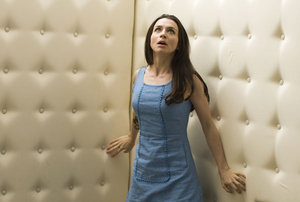 In the days before the great rebranded of SyFy, one thing that fans could always count on from the SciFi Channel was an entertaining and diverting mini-series to kick off the holiday season.  As many of our favorite series heading into repeats this year, SyFy continues that tradition with director and writer Nick Willing’s update of the classic story of “Alice in Wonderland,” “Alice.”

Set 150 years after the original Alice caused havoc in Wonderland, the story follows a new Alice, played by Caterina Scorsone, into a strange world beyond the looking glass.   But this Alice is not the same girl as the one who created such havoc years before.  Alice is in search of her boyfriend who slips a vital ring that allows access between Wonderland and our world into her pocket.  Alice is also a master of karate, which plays a pivotal role as the events unfold.

In Willing’s take on Wonderland, we are presented with some intriguing modern twists on the original conceits of of the Lewis Caroll classic.  In this version, the Queen of Hearts runs a casino that lures in unsuspecting victims from our world and harvests their emotions into a kind of a chemical drug.

Along the way, Alice meets new twists and takes on some of the familar characters from the story, including “Primeval” star Andrew Lee Potts as Hatter.  Hatter becomes a reluctant (at first) ally with Alice and a love triangle between he, Alice and Alice’s lost boyfriend begins to develop as the story progresses.

Relative newcomer Scorsone holds her own as Alice against a solid and veteran cast, including a lot of faces who will be familar to genre fans. (It’s always nice to see “Trek” alum Colm Meany on screen.)  The story itself is a solid and entertaining one and while it does take a few minutes to get rolling, it’s worth the time for the payoffs and visual treats that come as the story progresses.

As a re-telling, “Alice” stays honest to the spirit of the source material all while giving audiences something new to discover in this classic story.   It will delight you and it may send you to the library to re-read the original Lewis Caroll classics that serve as the series inspiration.